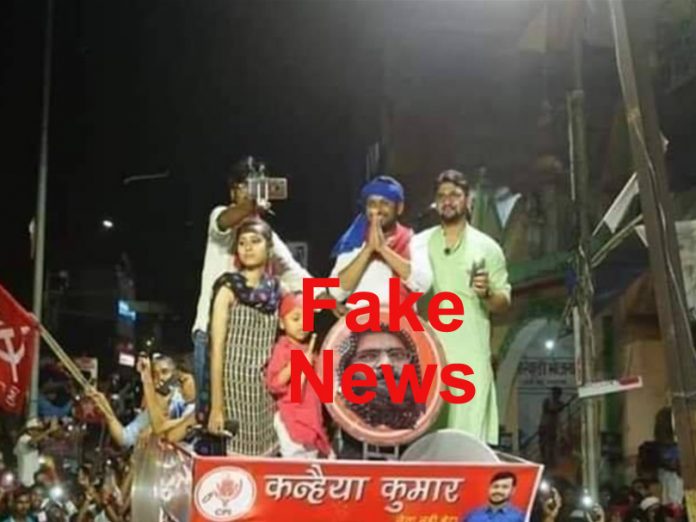 An image is doing rounds on social media in which Kanhaiya Kumar, CPI Begusarai candidate is seen purportedly campaigning behind a poster of Afzal Guru, a 2001 Indian Parliament attack convict.

The image is widely circulated on social media showing Kanhaiya Kumar standing on a campaign vehicle with a portrait of Afzal Guru on his vehicle.

The fact check revealed that the image is doctored. The viral image is taken from Kanhaiya Kumar’s mobile torch rally in Begusarai and is doctored. The original image has the poster of CPI’s symbol instead on Afzal Guru’s photo.

We used the keywords “Kanhaiya Kumar torch rally” on Google search we landed up to the 6.51 minute video of the same mobile torch show.

The original photo can be traced from the video at 1:50 minutes.

We used StalkScan to check the profile of the user Adarsh Kumar Bajpai who shared the doctored image and found many misleading posts on his profile.

We also observed that many users have commented at the post that it is fake.

Conclusion: The image of Kanhaiya Kumar campaigning behind Afzal Guru’s photo is fake.