Fact Check: Image of man who walked in to police station with a severed head viral with misleading claims 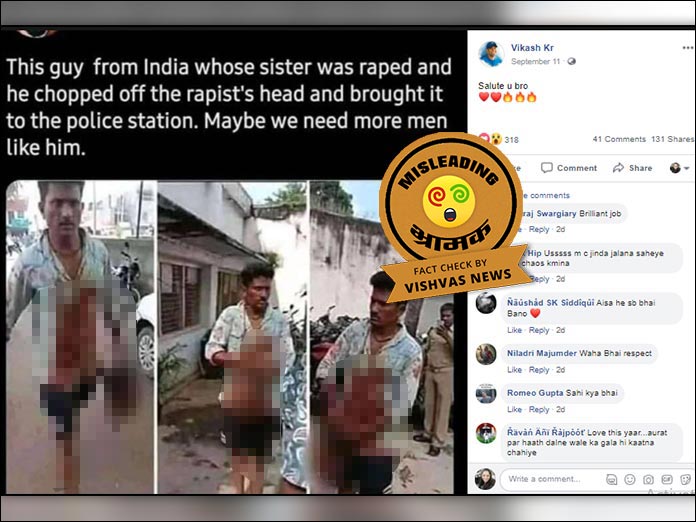 New Delhi (Vishvas Team). A picture of man with a severed head is viral on social media. The post is shared with a claim that he beheaded his sister’s rapist.

Vishvas News investigation revealed the claim to be misleading. The victim did not rape the man’s sister. We found that they both had clashes in the past due to the victim’s sexual advances towards the man’s mother. The man had cut the victim’s throat in 2018 over the past vengeance.

A picture of a man with a severed head is shared on Facebook reads, “This guy from India whose sister was raped and he chopped off the rapist’s head and brought it to the police station. May be we need more men like him.” The archived version of post can be seen here.

To investigate the post, we searched these photos using Google reverse image search tool. We found that the incident happened on 29 September 2018 in Mandaya district of Karnataka. We accessed news reports published on thenewsminute.com. According to the news report, “The 28-year-old accused Pashupathi brought the severed head of Girish (28) to the town police station in Malavalli… Pashupathi informed the police officials that Girish spoke ill of his mother, which triggered a fight between the two.”

We also found the news published on news18.com on 30 September which clarified that Pashupathi chopped off Girish’s head following an abuse towards his mother.

An article in the Times of India confirms that a case of murder was registered against the accused at Belakavadi police station. Both the accused and the victim were childhood friends. A police office quoted in the article saying, “Three years ago, Girish allegedly tried to abuse Pashupati’s mother. After this, there was a fight between the two and people had to intervene.”

Vishvas News contacted Mandya Sub Division DSP L Naveen to verify the claim. “This event is of 2018. Both the accused and the victim were childhood friends. Both were close for some time. The two quarreled for something on the day of the incident, after which Pashupati chopped off Girish’s throat. There was no rape case as in the viral claims. According to the statement, during the quarrel, Girish had verbally abused Pashupati’s mother and had made sexual advances towards her a few years ago. The case is still going on,” said Naveen.

Facebook User Vikash Kr from Ayodhya is one among the several users who had shared the post.

The video related to this incident also went viral in the past with the claim that the incident happened in Chennai. Vishvas News also investigated the issue earlier and the detailed investigation can be read here .

Conclusion: The viral post is misleading. The photo is of an incident that happened in 2018 at Mandya district of Karnataka. The victim had abused the man’s mother and also made sexual advances in the past, following which the man severed the victim’s head.