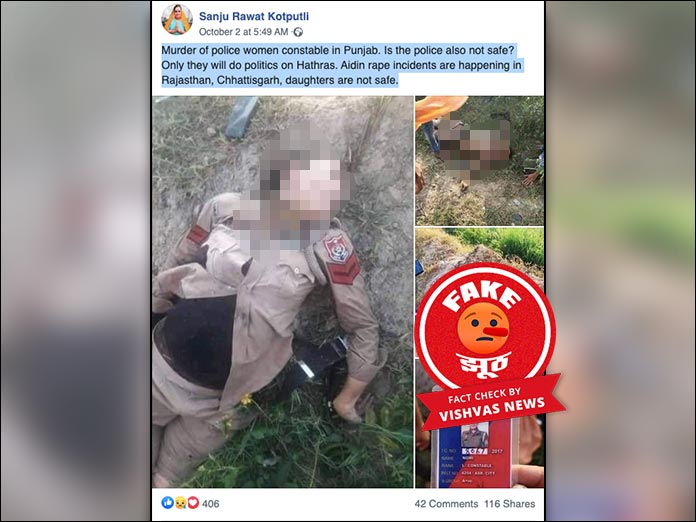 New Delhi (Vishvas News). A picture of a woman in police uniform and ID card is shared with a claim that she was raped and murdered in Punjab. The viral post states that her body was dumped on the road.

Vishvas News investigation revealed the claim is fake. The woman constable in the picture died in a road accident.

A twitter user sharing these pictures on Oct 2, wrote, “… Body of a female constable found near Punjab Fatehgarh Churian Road… Sangatpura, case of rape and murder.”

Facebook User Sanju Rawat Kotputli also shared these pictures writing, “Murder of police women constable in Punjab. Is the police also not safe? Only they will do politics on Hathras. Rape incidents are happening in Rajasthan, Chhattisgarh, daughters are not safe. ”

This post is archived version of it can be seen here.

We observed the pictures carefully. The ID card in the picture identifies her as Nomi designated as ‘L / Constable’ posted in Amritsar City.

We searched on the Internet using keywords (Nomi ,Constable, Amristar). According to a news report published by the Dainik Jagran on 1 October, “A woman constable of Punjab Police, who was going to duty in a two-wheeler on Thursday morning, was hit by a speeding Scorpio. The constable died in the accident…”

We also found this news on ‘ Tribune ‘ and ‘ Punjab Kesari’. None of the news reports had mentioned about rape as in the viral claim.

We contacted Jagran’s Amritsar reporter Nitin Dhiman to verify the claim. “The woman constable in the pictures died in a road accident. She was employed in Amritsar. The viral claim about her rape is fake,” said Dhiman.

Social scanning of the FB user who shared the viral picture with viral post revealed that he is from Rajasthan and has 21,427 followers on Facebook.

Conclusion: The viral claim that states woman constable was raped in Punjab is fake. She died in a road accident.