Fact Check: Indian Oil and Adani Gas is a joint venture since 2013, viral claim is misleading 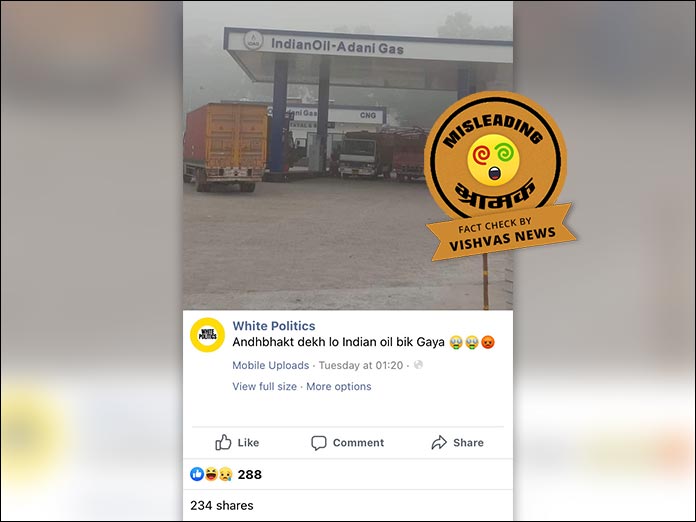 New Delhi (Vishvas News). A collage made with pictures of IndianOil and Indian Oil – Adani gas fuel pump is viral on social media with a claim that the ruling party has sold the Indian Oil Corporation Limited to the private player.

A picture of IndianOil and Indian Oil – Adani gas is shared widely on social media with users comparing the period of the Congress and the BJP rule in the country. The archived version of the post can be seen here.

We also spotted this pictures shared with similar claims in many other Indian languages.

We searched on the Internet for information about Indian Oil and Adani gas. According the IOAGPL website, “IOAGPL is a joint venture company of Indian Oil Corporation Limited (IOC) – a Maharatna Company of Government of India and Adani Gas Ltd. (AGL), a leading city gas distribution company and part of Adani Group – a well diversified business Group in private sector engaged in infrastructure development. IOAGPL has been formed to implement City Gas Distribution projects across the country for distribution of Natural Gas through network of underground pipelines.”

We also found this information of partnership between the two firms on the IndianOil website.

Vishvas News contacted IOAGPL spokesperson via email for clarification. He refuted the claims and clarified to us that it is a joint venture incorporated in October 2013.

Social scanning of the Facebook page White Politics that shared the viral post revealed that it has 1,65,730 followers and was created in February 2020.

Conclusion: The viral post is misleading. Indian Oil is not sold to private player Adani. IOAGPL is a joint venture for gas distribution projects across the country.