Fact Check: IPL 2020 has no China sponsors, the viral claim is fake 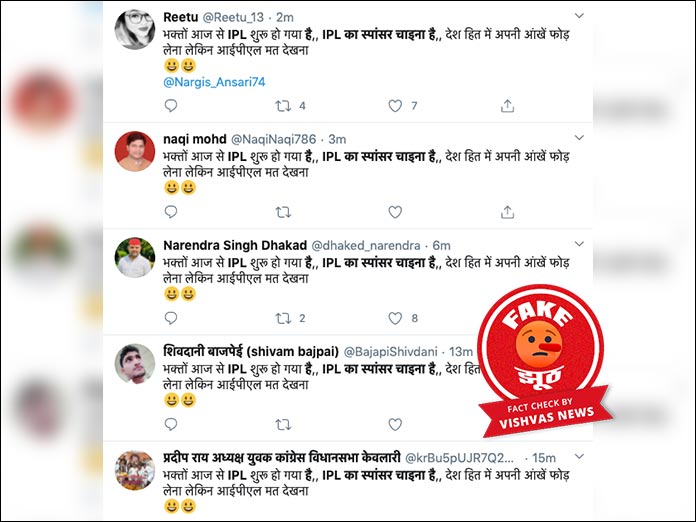 New Delhi (Vishvas News).A viral post on social media claims that China is sponsoring IPL 2020. The post alerts people not to watch IPL keeping eyes in the interest of the country.

Vishvas News investigation revealed the claim is fake. Dream11, an Indian company is the title sponsor for IPL 2020 and has no Chinese sponsors this year.

A Twitter user wrote, “IPL has started from today, IPL sponsor is China, Keep your eyes in the interest of the country but don’t watch the IPL.” The archived version of the post can be seen here.

Several users have shared similar claims even on Facebook.

We searched on the Internet for news about IPL sponsors this year. Amid India-China standoff at the Galwan Valley, Dream11 replaced Chinese mobile company Vivo as title sponsor for IPL 2020.

According to an article by Dainik Jagran, “The Board of Control for Cricket in India (BCCI) has parted ways with the Chinese mobile company VIVO for IPL 2020 as the title sponsor. This agreement for 5 years is breaking after two years… due to the violent clash in East Ladakh between the soldiers of India and China.”

However, we came across criticisms for Dream11 to be associated with Chinese firm. We found an article published by the Business Standard that clarified Dream11 Company is completely a homegrown Indian brand. The article has quoted the company’s spokesperson stating that Dream11 is almost entirely owned by Indians, which includes its founders, all 400+ Indian employees and our Indian investors such as Kalaari Capital and Multiples Equity. Out of the five investors, one of the investors has Chinese origins and holds a very small minority stake.

We further researched about the co-sponsors for IPL2020. According to the article by the SportStar, “While Dream11, PhonePe, Amazon and Byju’s have come on board as co-presenting sponsors, brands such as Polycab, USL, Coca-Cola, ITC Foods, Mondelez, Kamla Pasand, RummyCircle, AMFI and P&G have come on board as associate sponsors.”

We spoke to Dainik Jagran’s sports correspondent Abhishek Tripathi to verify the claim. Denying the claims, he said, “Vivo was ousted due to border tensions between India and China. IPL 2020 has no sponsors from China. The viral claim is fake.”

Facebook user Vedpal Yadav is one among the several users who shared the viral claim. Social scanning of his profile revealed that he is from Khekra, Uttar Pradesh and has 5,000 friends.

Conclusion: The viral claim is fake. Dream11, an Indian company is the title sponsor for IPL 2020. IPL has no China sponsors this year.