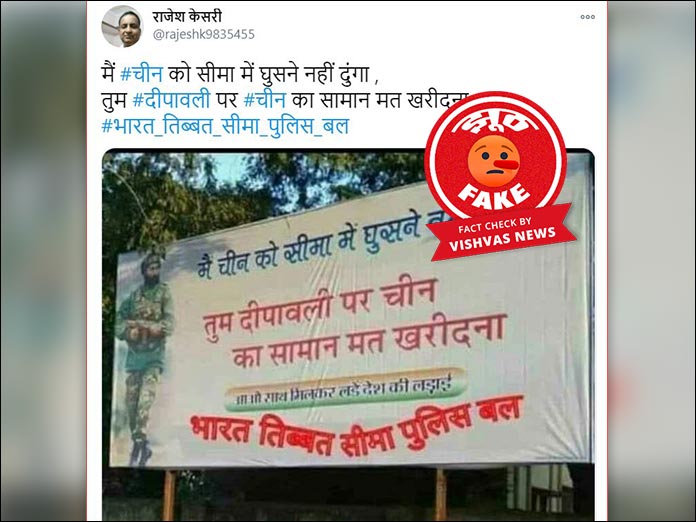 New Delhi (Vishvas News). A picture of a banner is viral on social media amidst the Diwali festival season in the country. The banner allegedly from Indo-Tibetan Border Police Force (ITBP) has appealed not to buy goods from China. This picture is viral on various social media platforms like Facebook, Twitter and WhatsApp.

Vishvas News investigation revealed the viral post is fake. The banner of an institution in Chittorgarh, Rajasthan is edited and viral as from ITBP.

On keen observation of the banner, we could identify that the words ‘Indo-Tibetan Border Police Force’ do not match with the other content in the banner and stands separately. We searched the viral image on the Internet using Google reverse image search tool to find its original source. We found this banner on the cover picture of Facebook page RK Agency uploaded on October 2017. The original banner was attributed to Swadeshi Jagran Manch, Chittorgarh. We could confirm that the words Indo-Tibetan Border Police Force has been edited and pasted.

We contacted ITBP spokesperson Vivek Kumar Pandey to verify the claim. He told us that the viral banner alleging to be of Indo-Tibetan Border Police Force is fake and ITBP has not made any such appeal.

Social scanning of the Twitter user who shared the viral picture revealed that he is from Bihar and has 2,443 followers on twitter. His account is active since December 2016.

Conclusion: The viral post is fake. The banner is of Swadeshi Jagran Manch, Chittorgarh and is falsely attributed to ITBP.