The sensational post of the religion killing in Kolhapur is fake. No such incident has happened in Kolhapur. 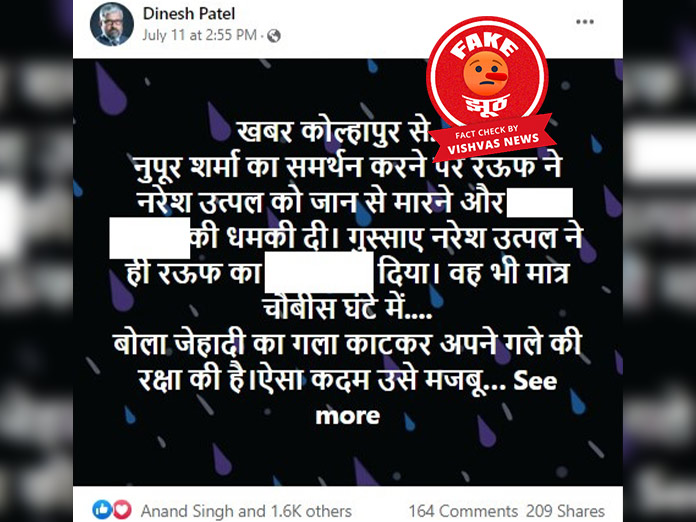 New Delhi (Vishvas News): A very sensational post is widely being shared on social media with the claim that a Hindu supporter of Nupur Sharma killed a Muslim man in Kolhapur, Maharashtra. Because the Muslim had threatened to kill the other. Vishvas News in its investigation found that this sensitive message was just a rumour. No such incident happened in Kolhapur.

To investigate this post, we first resorted to keyword search. We could not find any credible information or media reports to prove that a Nupur Sharma supporter had killed someone named ‘Rauf’ in self-defence. After this we started scanning the Twitter account of Kolhapur Police. On July 12, Kolhapur Police made a tweet in Marathi. Caption reads, “Some anti-social elements are spreading rumors on social media. It is being said on social media that an unpleasant incident has happened in Kolhapur district in support of Nupur Sharma. Do not believe such rumors, the post is fake. Do not forward or comment on this. The cyber team is keeping an eye on those who send such messages. Police will take strict action against those who do such acts.’

We reached out and talked to Kolhapur SP Shailesh about this claim. He said, ‘This is fake news. No such incident happened.’

At last we scanned the profile of Facebook user ‘Dinesh Patel’ who made the fake claim. According to his profile, he lives in Gujarat and is inspired by an ideology.

Conclusion: The sensational post of the religion killing in Kolhapur is fake. No such incident has happened in Kolhapur.