Fact Check: Manmohan Singh was not India’s Prime Minister at the time of this video 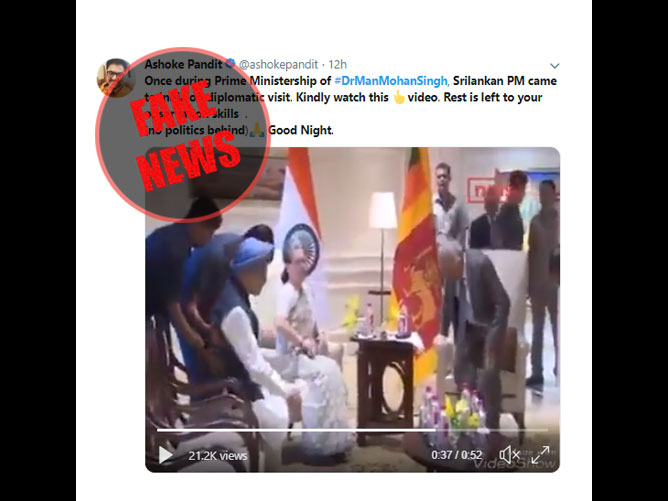 To begin our investigation, we first took the keyframes of this video and reverse image searched it on Google. We wrote keywords ‘Sonia Gandhi Meets Sri Lankan Prime Minister’. In this video NNIC can be seen written in the extreme right corner, hence we used NNIC also as a keyword. We were able to find this video on Youtube. This video was posted in 2017 by a YouTube channel called NNIS News, and the video’s description was “On his four-day visit to India, Sri Lanka Prime Minister Ranil Wickremesinghe met opposition party leader Sonia Gandhi and former Indian PM Dr. Manmohan Singh”.

We searched Google news and found that Sri Lankan Prime Minister Ranil Wickramasinghe came to India in 2017 and met Sonia Gandhi on the sidelines of his visit.

It is important for us to tell you that Sonia Gandhi was the President of Congress Party at the time of this meeting. In December 2017, she handed over her position to her son Rahul Gandhi.

The concerned video has been shared on many other social media pages as well.

Let us tell you that Ashok Pandit is a famous Indian film producer and a social worker. He is currently the President of IFTDA (Indian Film and Television Director’s Association). Ironically, Ashok Pandit was also the co-producer of the film ‘The Accidental Prime Minister’. His Twitter account is verified.

Conclusion: In our investigation, we found that the description of this video shared by Ashok Pandit is misleading. While shooting this video, Manmohan Singh was not the Prime Minister of the country.