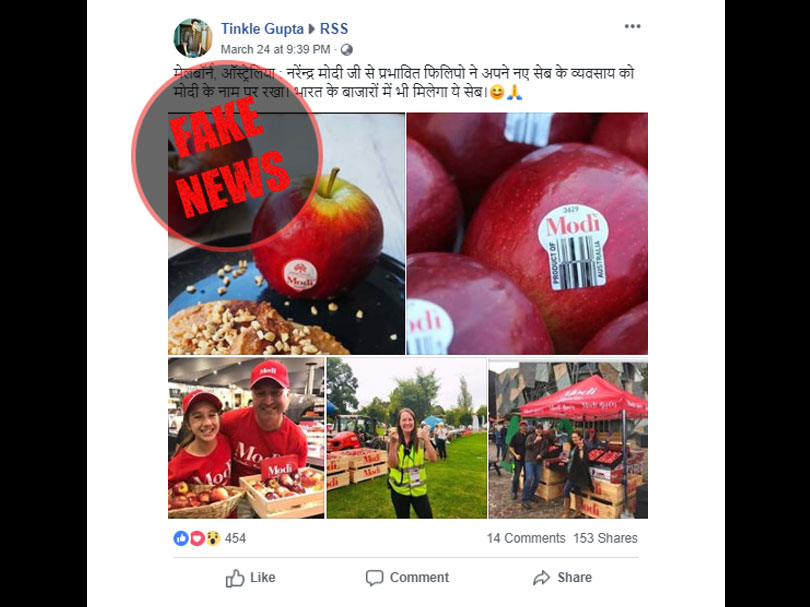 New Delhi  (Team Vishvas).  A post is going viral on social media that claims that an Australian man has named his Apple Company after Indian PM Narendra Modi. In our investigation we found that this news is wrong, the name of this Australian company is indeed Modi Apple, but it is not named after Indian Prime Minister. The company is in fact named after Italian painter Amedeo Modigliani.

The viral post comprises of 4 photos along with a description that roughly translates to “Melbourne, Australia: A man named Filipino was so inspired by Narendra Modi that he named his apple company after his name, these apples will soon be available in India”.

2) These apples will soon be available in India too.

In order to investigate this post, we decided to check these two claims one-by-one. We first searched ‘Modi Apple’ on the Internet. On the first page itself we found both’ Modi Apple’s’ Facebook page and website.

When we opened the about us section of Modi’s Facebook page, we found that it is clearly stated here that “The name (Modi Apple )comes from the world of art, more exactly from Amedeo Modigliani, an artist born in Livorno and affectionately known as Modì to his friends. “

We also called Australia-based Modi Apple’s office and we were told that “As written in the company’s website, the name of Modi Apple is derived from Italian artist Amadeo Modigliani.”

We then investigated the second claim, and found that this claim is correct. The news section on Modi apple’s website says that “the Chairman of CIV – Consorzio Italiano Vivaisti – Pier(Modi Apple) Filippo Tagliani and the Director of I.G. INTERNATIONAL Pvt Ltd Tarun Arora have officially signed a Commercial Partnership Agreement to develop the Modìciv™ apple brand in India.”

In this context, we also found a story on Economic Times, which states that “Modi apples, a popular apple variety from Italy has officially entered India by appointing IG International as its authorised distributor for the country.”

Let us tell you that all the photos in the viral post have been taken from Modi Apple, Australia’s Facebook page.

This post was shared by a Facebook user Tinkle Gupta on a Facebook page named RSS. This page is not RSS’ official page. On scanning this profile, we found that according to the intro of Tinkle Gupta, he is a fan of a particular politician. He is a resident of Chhattisgarh and has more than 2000 Facebook friends.

Conclusion: In our investigation, we found that the viral post is wrong. In fact, the name of this Australian company is indeed Modi Apple, but it is not named after the Indian Prime Minister. The company is actually named after an Italian painter Amedeo Modigliani.