Fact Check: This picture of people waving BJP flag on a pole is edited; The original picture is of Uttar Pradesh and the flag was of BSP.

Viral image claiming that the human pyramid hoisted a BJP flag in Tamil Nadu is fake. The image originally has a BSP flag and is not from Tamil Nadu but from Shahpur, Uttar Pradesh clicked during the 2017 UP elections. 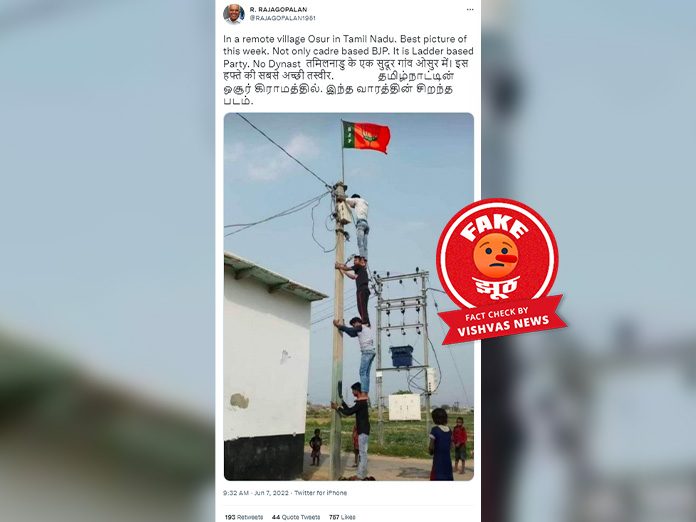 Vishvas News (New Delhi): Vishvas News came across an image being shared on Twitter, where four people could be seen standing on each other and hoisting a BJP flag. It is being claimed that this is from Tamil Nadu. Vishvas News in its fact check found the image to be morphed. In the original picture the flag is not of BJP but of BSP.

Other users (archive) too are sharing this image with similar claims:

Vishvas News started the investigation of the image with a simple Google Reverse Image search.

We found the Twitter handle of Shirisha Swaero Akinapally who had shared the picture on May 31, 2022.

It was thus clear that the picture had BSP flag and was morphed and replaced with BJP flag.

Vishvas News in the last step of investigation reached out to the BSP state president, Telangana M Balaiah. We sent him the picture through WhatsApp. He too confirmed that the image had a BSP flag and not BJP flag.

However, it was yet not clear from where did the picture actually belong. Vishvas News then reached out to a few journalists in Telangana, who connected us with the BSP members.

Vishvas News in its next step of investigation got in touch with Rohitash Kumar. He told us that the picture was clicked by him in the year 2017 in Shahpur, Uttar Pradesh. He also confirmed that the BSP flag was hoisted by his cousins and brothers from top, Titu, Rinku, Bablu and Arvind. Rohitash Kumar also informed that the flag is still in the same place in Shahpur, Kutub, Aligarh, where the image was clicked and also shared the pictures of the same location.

Twitter user R Rajagopalan who claimed that the image is from Tamil Nadu’s remote village Osur is a media personality. He has 38.4K followers on Twitter.

Conclusion: Viral image claiming that the human pyramid hoisted a BJP flag in Tamil Nadu is fake. The image originally has a BSP flag and is not from Tamil Nadu but from Shahpur, Uttar Pradesh clicked during the 2017 UP elections.