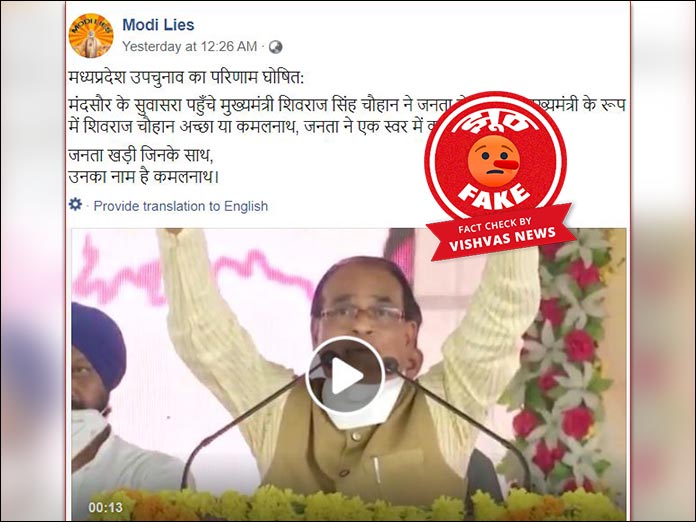 New Delhi (Vishvas News). A video of Madhya Pradesh Chief Minister Shivraj Chauhan is viral on social media recently ahead of upcoming assembly by-election. Chauhan can be seen asking the crowd that who has performed good as Chief Minister. We could hear voices replying, “Kamal Nath”.

Vishvas News investigation revealed the video is fake.  We found that the video has been edited with audio to sound ‘Kamal Nath’ in place of Shivraj Singh Chauhan.

Facebook page Modi Lies uploaded a video on 22 September writing, “Results of Madhya Pradesh by-election declared: Chief Minister Shivraj Singh Chauhan, who reached Suwasra in Mandsaur, asked the public whether Shivraj Chauhan as Chief Minister was good or Kamal Nath, the people said in one voice, Kamal Nath.
With whom the public stands,
His name is Kamal Nath.”

We started the investigation by scanning the social media account of CM Shivraj Singh Chauhan. We
found a tweet posted on 20 September from his official account. The tweet had a video of the event held at Sitamau (Suwasra) in Mandsaur.

At 59:26 minutes of the video, we found the same footage, which has now been tampered and share with false claims. In the video, CM asks the public that who is good… Shivraj or Kamal Nath, public can be heard replying, ‘Shivraj’.

We found the same video posted on 20 September in Shivraj Singh Chauhan’s YouTube channel. This was a live streaming video. You can watch the full video here.

During Google search, we found authentic news reports of CM’s Mandsaur meeting on many websites. The news had the same content, which was in the video of CM’s original speech. We also found the similar video on Zee News website.

Vishvas news contacted Dr. Shivraj Singh Dabi, convenor of Madhya Pradesh BJP Media Cell. He told us that CM’s Suwasra video has been tampered and they have filed an FIR against it.

Social scanning of the page that shared this viral video revealed that it has more than four lakh followers.