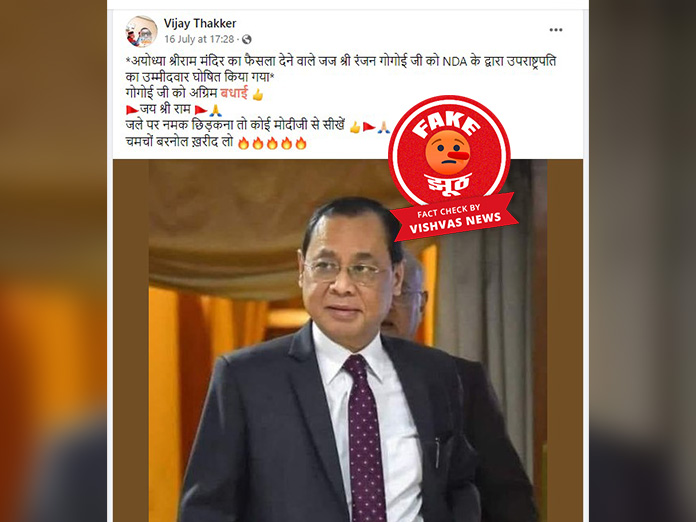 We searched on Google through several keywords. We found a report related to the claim on Dainik Jagran website. It was published on 16 July 2022. According to the report, the Governor of West Bengal Jagdeep Dhankhar has been declared the candidate from the NDA side. This decision was taken in the meeting of the BJP Parliamentary Board. After which BJP President JP Nadda announced the name of Jagdeep Dhankhar. Many other news websites also published this news.

During investigation, we found a tweet related to the viral claim on the official Twitter account of Home Minister Amit Shah. On 17 July 2022, Amit Shah shared some pictures with Jagdeep Dhankhar and congratulated him on being elected as the NDA’s Vice Presidential candidate.

According to a report published on the website of Aaj Tak on 18 July 2022, Jagdeep Dhankhar, the Vice Presidential candidate from NDA, has filed the nomination. News agency ANI has also shared the pictures of the nominations on its official Twitter handle.

For more information Vishvas News contacted Dainik Jagran’s National Bureau Chief Ashutosh Jha. He told us the viral claim is false. Jagdeep Dhankhar has been chosen as the Vice Presidential candidate by the NDA.

In the last step of investigation, Vishvas News did a social background check of the Facebook user Vijay Thakker that shared the viral post. We found that Vijay Thakker is a resident of Gujarat. The user has more than 1200 friends and 129 people follow on Facebook.