Fact Check: NDMA did not suggest government to impose 46 days lockdown, the viral letter is fake 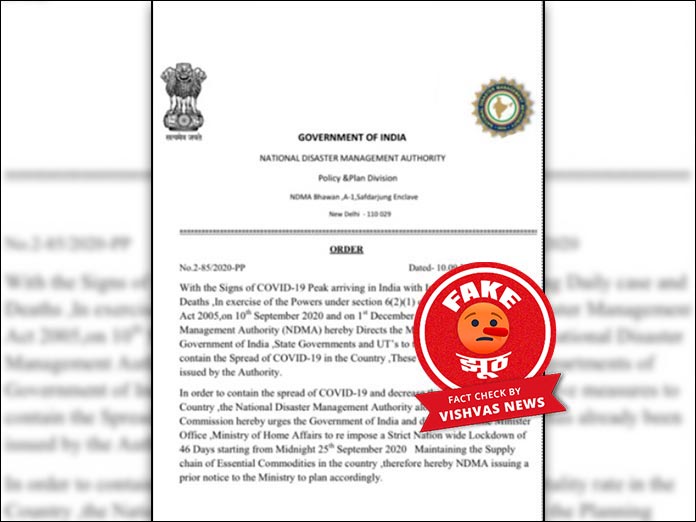 New Delhi (Vishvas News). A viral letter on social media allegedly from the National Disaster Management Authority (NDMA) urges the central government to announce 46 days lockdown in the country stating from September 25 amid the increase in number of Covid-19 patients.

Vishvas News investigation revealed the claim is fake. The Central government has not made any such decision to implement national lockdown from September 25.

A viral letter allegedly from NDMA, urges the Government of India and directs the Prime Minister Office, Ministry of Home Affairs to re impose a strict nation wide lockdown of 46 days starting from September 25. The viral letter can be seen below.

As the letter claimed to be from the NDMA, we searched on the official NDMA website. We found a copy of the order dated May 1, 2020 in the Advisory section that pertains to the guidelines for extending lockdown for two weeks after May 4.

We could clearly identify the format used in this order and confirmed that the viral letter used the copied format. However, we did not find any recent advisory or press release about extending lockdown.

Vishvas News contacted NDMA Director (PR & AG) Bhupinder Singh to clarify the viral claim.  “No such letter has been written by the NDMA nor there is any suggestion from the government about the imposition or extension of lockdown on our behalf,” the director said.

We searched on the Internet for any authentic news report and found that there is no mention about nation wide lockdown in India. We found several reports about Israeli government’s decision to impose a nationwide lockdown once again for three weeks.

The viral letter in claim states that a stringent nationwide lockdown is needed for the next 46 days from midnight of 25 September 2020 to prevent the rising corona virus infection in the country and reduce its mortality.

According to information provided by the Ministry of Health, the recovery rate has increased to 78.27 per cent among cases of fast growing infections in India. Sixty per cent of the total patients are in the five most affected states, which has recovery rate around 60 per cent.

According to Covid-19 India Tracker, (as of 15 September till 8 am) the total number of patients in India has crossed 49 lakhs. So far 80,776 people have died in India due to coronavirus.

Conclusion: The viral claim is fake. NDMA has not written a letter to the central government to re impose national wide lockdown for 46 days starting from September 25.