Fact Check: News of Modi’s appointment as head of 53-member committee is false 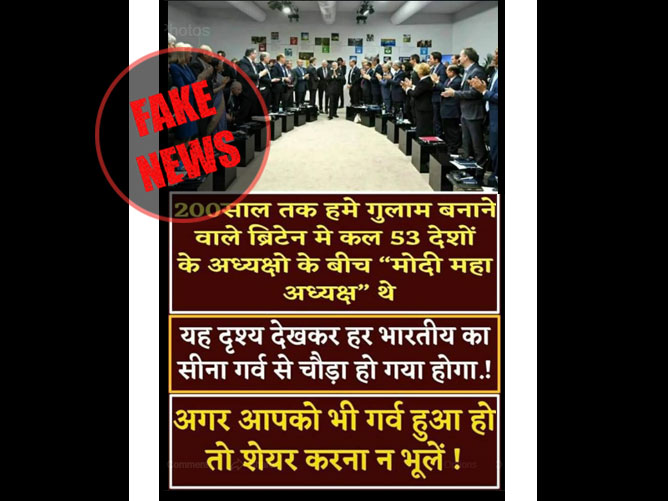 New Delhi (Team Vishvas). A post is going viral on social media in which Prime Minister Modi can be seen standing among some world leaders. The photo comes with a description , “PM Modi was the head of the committee of 53-nations in UK that kept us slave for 200 years. Do not forget to share. “

Actually this message is misleading. This picture was taken at WEF, Switzerland and not in The UK.

To start our investigation, we took a screenshot of this image and searched it on Google reverse image. In our search we found a news story filed on 24th January 2018 where this image was used. This picture is from the 2018 World Economic Forum in Davos, where Prime Minister Narendra Modi gave a speech.

India is a member of several international groups, including the G20, SAARC and Commonwealth. In all these groups, the process of selection of the president is done in a democratic way where the chairman is appointed on the basis of vote. The viral post talks about 53 members. The only prominent international group with 53 members in Commonwealth of Nations. Both India and UK are the members of this group. It appears that the viral post is talking about this group. Let us tell you that the head of this organization is Queen Elizabeth II.

Conclusion: In our investigation we found that the viral picture is from 2018 Davos Summit and PM Modi was not chosen as the head of this group in this meeting.