Fact Check: No, New York Times did not write this article on Indian PM Modi 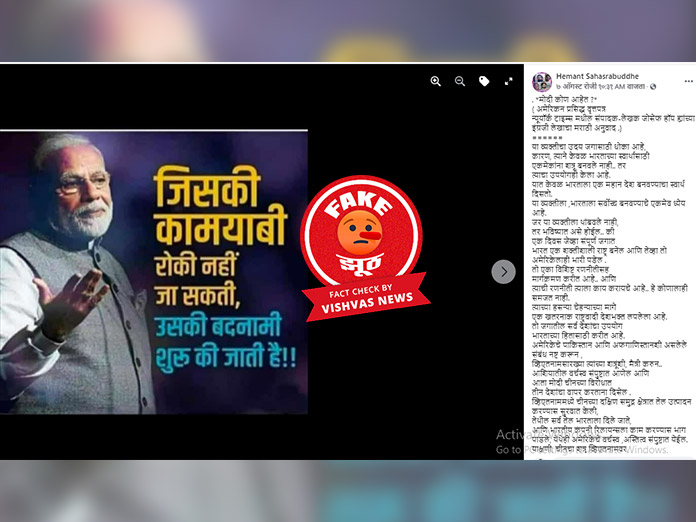 New Delhi (Vishvas News): Vishvas News came across a post in Marathi, where it was claimed that editor-writer of the noted newspaper of US, New York Times, Joseph Hope wrote an article on Indian Prime Minister Narendra Modi, titled, ‘Who is Modi?’, praising Narendra Modi. Vishvas News in its investigation found the claim to be fake.

Facebook user Hemant Sahasrabuddhe on 7th August uploaded a picture of Indian PM Narendra Modi and wrote in Marathi a long message which was claimed to be a translation of the article in New York Times. The article praised Modi and claimed that all the steps taken by Narendra Modi are ensuring that India becomes a world power one day. Post also claims that India will rule the world if Modi is not stopped.

Vishvas News started its investigation with a simple google search. We searched for keywords such as ‘article on Indian PM Narendra Modi in New York Times’.

We reached the search section of the New York Times where there were all the articles attributed to PM Narendra Modi. We did not find a single article that was similar to the article being widely shared.

We then checked the editorial section of the New York Times. We did not find any article similar to the viral post.

We then checked the website of New York Times Company and its ‘Our People‘ page. Nowhere in the website did we find a reporter or an editor named Joseph Hope.

It had been mentioned in the website, “Dean Baquet is executive editor of The New York Times, a position he assumed in May 2014. Mr. Baquet serves in the highest ranked position in The Times’s newsroom and oversees The New York Times news report in all its various forms.“

Vishvas News even checked if there are any articles by Joseph Hope but none of his articles match the viral article.

It was hence clear that there was no article written by Joseph Hope in the New York Times.

Vishvas News has also reached out to New York Times for a comment. Nicole Taylor, spokesperson for the New York Times confirmed that there is no one in NYT by the name, ‘John Hopps’ or ‘Joseph Hope’. She also added that the message is fabricated and untrue. The editor of The New York Times is Dean Baquet.

Vishvas News then did a social background check of the Facebook user who uploaded the post. Hemant Sahasrabuddhe is a resident of Pune.