Fact check: This image is not related to Tamil Nadu election; Old photo from Thailand viral with fake claim

An old picture of flood relief packages from Thailand is now viral with fake claims. 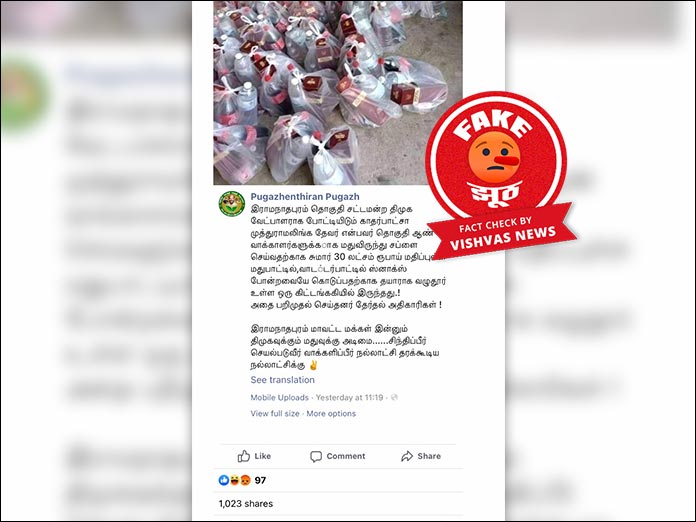 Vishvas News investigation revealed that an old picture of flood relief packages from Thailand is now viral with fake claims.

A viral post with picture of liquor bottle packages is shared writing, election commission officials seized liquor bottles from Kadarbasha, DMK candidate from Muthuramalinga Devar contesting in Ramanathapuram constituency, worth Rs 30 crores in supply to lure voters. The archived version of the post can be seen here.

We also similar claims shared in the name of AIADMK candidate Udhayakumar in Thirumangalam constituency.

Tamil Nadu Assembly Elections will be held on 6 April and counting will be on 2 May, states an article in the Dainik Jagran.

While we found news reports on the DMK Kadarbasha and AIADMK Udhayakumar’s nomination for the upcoming polls in Tamil Nadu, we did not find authentic sources confirming the viral claim.

Vishvas News contacted Ramanathapuram constituency sub collector office for verification. “This fake post is viral since yesterday,” replied an official to us on call.

We searched for the image on the Internet using Google reverse image search and found it on Facebook Page Thai TV social posted on 22 September 2019 with caption stating relief bags for victims.

A Thai News website has also published many such images in a news story where a man can be seen distributing relief packages of alcohol along with other essential food items.

Vishvas News has also debunked the fake claims around this picture during Bihar elections in last October.

Social scanning of the user who shared the post revealed that he is from Tamil Nadu and has 3,490 friends on Facebook.

Conclusion: An old picture of flood relief packages from Thailand is now viral with fake claims.