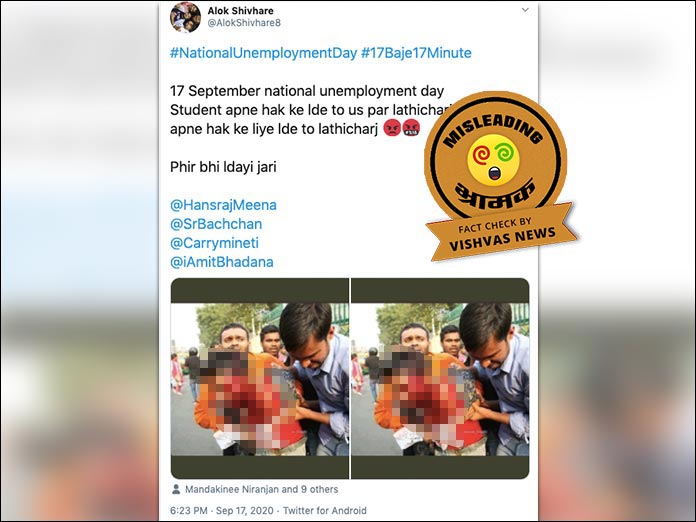 New Delhi (Vishvas Team). A post with a picture of an injured man is viral on social media with a claim that there was a lathi charge on students protesting for their rights on September 17, National Unemployment Day. We found the claim first on twitter and then on Facebook.

Vishvas News investigation revealed the claim is misleading. A set of old images of a 2018 incident in Lucknow, Uttar Pradesh is viral now as lathicharge on students protesting against unemployment.

More or less similar claims with the image of the injured man along with other images are viral on several social media platforms.

While we found many authentic media reports on the Internet about lathi charge on students recently.

We connected to Lucknow Police PRO for clarification. “This is an old picture. Nobody was injured in Lucknow yesterday,” said the PRO.

We took a snap shot of the image of the injured man and searched it on the Internet using Google Reverse Image search tool. Our search results revealed that the image is viral on social media since 2018.

We found the viral images on Amar Ujala news website. According to the report published on 2 November 2018, “Candidates who surrounded the assembly several times clashed with the police, seeking to reduce the cut-off marks in filling 68,500 assistant teacher posts. Angry policemen lashed out at the candidates fiercely. The police ran and beat the protesters.”

We also found a video posted on Mirror Now’s YouTube channel that with description, “U.P. teachers recruitment scam: Lucknow protestors lathicharged outside the State Assembly. The protests broke out after two rulings Allahabad High court which quashed the selection of over 12,000 government teachers and ordered a CBI probe on the discrepancies of the Uttar Pradesh government’s recruitment exercise that began earlier this year.”

On keen observation of the viral image we found a watermark ‘Ashutosh Tripathi’ that could possibly be the photographer’s name.

We contacted the photojournalist Tripathi for clarification. “I clicked those images in 2018 at Lucknow in front of Vidhan Sabha,” said Tripathi.

He also shared a tweet posted by Rahul Gandhi on 3 November 2018.

Twitter user Alok Shivhare is one among the several users who shared the viral images. Social scanning of his profile revealed that his account is active since August 2016 and has 45 followers. The post in claim has been retweeted around 1.4K times and has 808 likes.

Conclusion: The images shared with the viral post are not of any recent incident. Old images of a 2018 protest in Lucknow, Uttar Pradesh are viral now with fake claims.