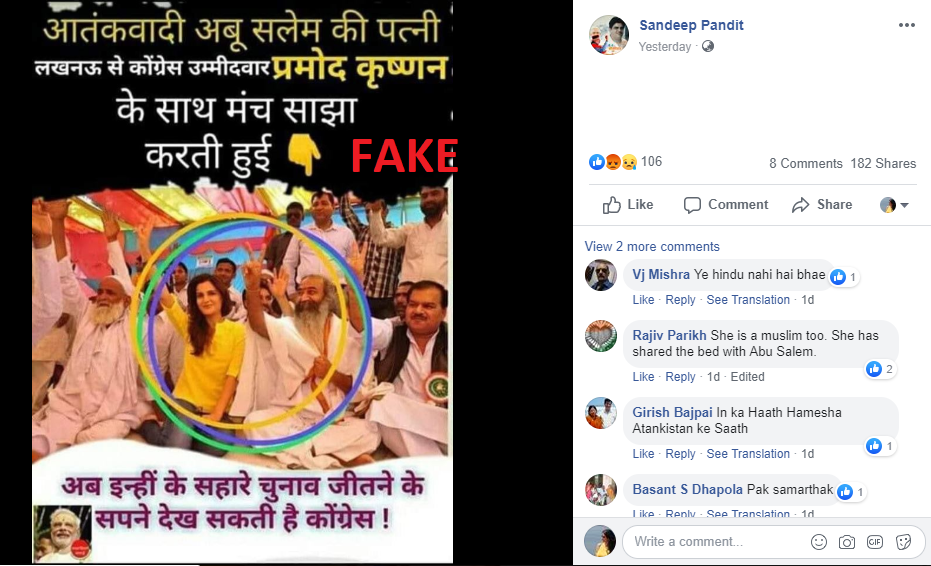 A photo is getting viral on Facebook accompanied with a text in Hindi that translates to “Wife of terrorist Abu Salem sharing stage with Congress candidate from Lucknow Pramod Krishnan.”

A Facebook user ‘Sandeep Pandit’ has shared an image in which former Bollywood actress Monica Bedi is sitting with Pramod Krishnam, who is Congress candidate from Lucknow Lok Sabha constituency. The photo was accompanied with text:

On investigating the post it was found that the claim is misleading.

1. As mentioned in the text, the lady shown in the image is the wife of Abu Salem. Many news reports claimed that she isn’t Salem’s wife. In her interviews and statements to media, Monica had said that although she had known Salem for several years, they had never got married.

3. The image that is recently posted on the Facebook page of the user ‘Sandeep Pandit’ is an old picture and not takenduring the2019 Lok Sabhaelections. Whileapplying Google Reverse Image Search on the picture posted by the user, we found that the photo was used in an article published in Dailyhunt on Aug 29, 2017.

In the same Dailyhunt article, it is written that Pramod Krishnam had invited Monica Bedi for his campaigning during 2014 Lok Sabha elections when he was the Congress candidate from Sambhal in Uttar Pradesh.

Vishvas News team verified whether Pramod Krishnam was one of the INC candidates for Uttar Pradesh General Elections 2014 and we got the following list:

This proves that the viral image is not that of the recent elections but that of 2014 elections.

In another report in Outlook website, we found a similar photo in which Monica Bedi is seen in the same dress sitting with a person on dais. The caption of the photo, which was a PTI image, says –”Monica Bedi campaigning for Congress candidate Acharya Pramod Krishnam.”

A video of 2014 Lok Sabha Elections was also found in Google search in which Monica Bedi can be seen campaigning for Pramod Krishnam at Sambhal (UP).

We also contacted Prabodh Krishnan over phone and he denied that Monica Bedia did not campaign with him in the recent Lok Sabha elections.