A collage of three photographs showing some weapons is viral with fake claim. The weapons shown have no relation with the Rashtriya Swayamsevak Sangh. 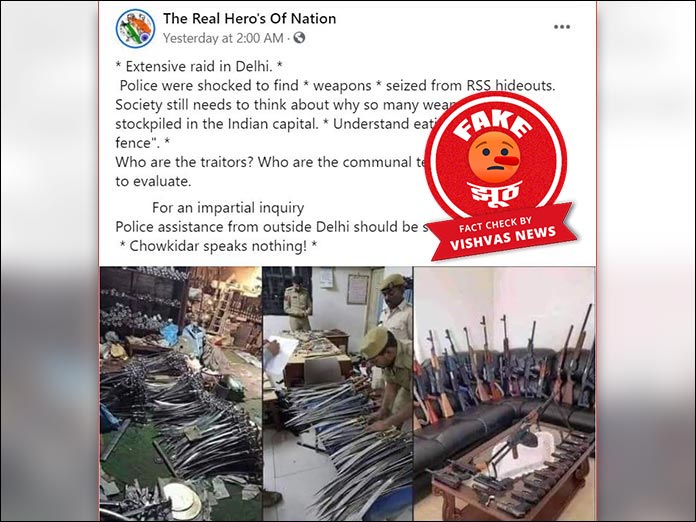 Vishvas News (New Delhi): A collage of three photographs showing some weapons is going viral on social media. It is being claimed that these weapons have been found during a raid at the Rashtriya Swayamsevak Sangh’s location in Delhi.

Vishvas News investigated the viral post and found it to be fake. These pictures have gone viral with different claims earlier as well and Vishvas News debunked the claims.

Facebook page, The Real Hero’s Of Nation, claimed in a post published on March 23: Extensive raid in Delhi. Police were shocked to find * weapons * seized from RSS hideouts. Society still needs to think about why so many weapons were stockpiled in the Indian capital. * Understand eating “crops by the fence”.* Who are the traitors? Who are the communal terrorists? People need to evaluate. For an impartial inquiry Police assistance from outside Delhi should be sought * Chowkidar speaks nothing!”

Vishvas News observed all the pictures carefully and debunked each claim one by one. We searched the first picture using the google reverse image search tool. We found a link on the flicker website. The account on which the image was found was named Khalsa Kirpan Factory. We contacted the factory owner Bachchan Singh. He told that the viral picture is from his shop. It has gone viral many times with fake claims.

We then performed Google reverse image search on the second photo. We found it on the Twitter handle named @GujratHeadline. In a tweet dated March 5, 2016, it was stated that the weapons were found at the Novelty store in Rajkot. We saw the same policeman, the weapon, and the police station in the post as shown in the viral picture.

We investigated the third photo by performing Yandex reverse image search. We found this picture shared by an Instagram user named @mehrzadalavinia. This photo was uploaded on 17 April 2019.

Vishvas News approached the Rashtriya Swayamsevak Sangh and spoke to the spokesperson of Delhi province, Rajiv Tuli. He said that the viral posts are fake. He further stated that the photos used in the viral post have no connection with the Sangh.

We scanned the Facebook page The Real Hero’s Of Nation who shared the fake post. We found that the page has 795 followers. This page has been created on February 27, 2021.

Conclusion: A collage of three photographs showing some weapons is viral with fake claim. The weapons shown have no relation with the Rashtriya Swayamsevak Sangh.