The image of Khalsa Aid going viral in the name of Uttarakhand floods is that of Bihar floods from 2019. Viral claim is false. 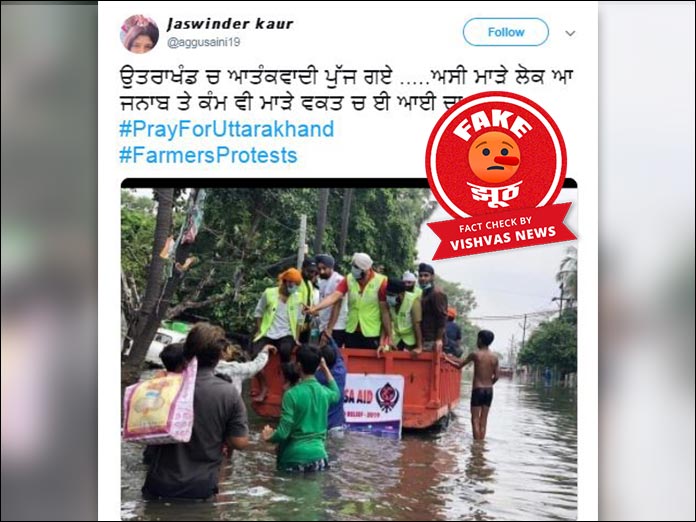 New Delhi (Vishvas News): Vishvas News came across a picture of Khalsa Aid carrying out relief mission in the currently distressed state of Uttarakhand, which is affected by floods. Social media users are sharing the picture claiming that the picture is that of volunteers of Khalsa Aid providing relief material to the flood hit Uttarakhand. Flash floods in the Alaknanda river system caused widespread destruction recently.
Vishvas News in its investigation of the viral picture found that the image is old and belongs to the relief aid being provided during the Bihar floods in the year 2019.

Since the flash floods struck Uttarakhand, an image is being widely shared on the social media platforms that claim that the Khalsa Aid has reached the state. In the image a few people are seen in a truck distributing the relief material.
The post is being shared by various users.

Amandeep Singh @Amandee11748300 wrote: UTTARAKHAND: Ground Zero Update @khalsaaid_india volunteer team is at ground zero where people are stranded and stuck due to glacier disaster. Assessments are being done presently on ground zero in coordination with state disaster authority. #Khalsa_Aid and shared the picture.

Translation: Terrorists have arrived in Uttarakhand ….. We are bad people, sir, and work is also bad.

Vishvas News started its investigation with the picture being shared. We checked the picture carefully and zoomed it. We found out that on the banner, the year ‘2019’ was mentioned.

Later, Vishvas News ran a google reverse image search on the image and found that the image was used in an article on PTC Punjabi. The article was uploaded on 4th October, 2019.
Read the entire article here.

In our next step to verify this image Vishvas News reached out to its colleague, Amit Alok from Dainik Jagran, Bihar. He verified that the image is indeed that from Bihar floods in the year 2019.

Khalsa Aid did reach out to the distressed in Uttarakhand and they have shared the details about the same on their Twitter handle.

Finally, Vishvas News did a social background check on the profile that shared viral picture, Jaswinder Kaur @aggusaini19 writes in her bio that she is from Mohali and she joined Twitter on November 2020. 393 people follow the user.

Conclusion: The image of Khalsa Aid going viral in the name of Uttarakhand floods is that of Bihar floods from 2019. Viral claim is false.