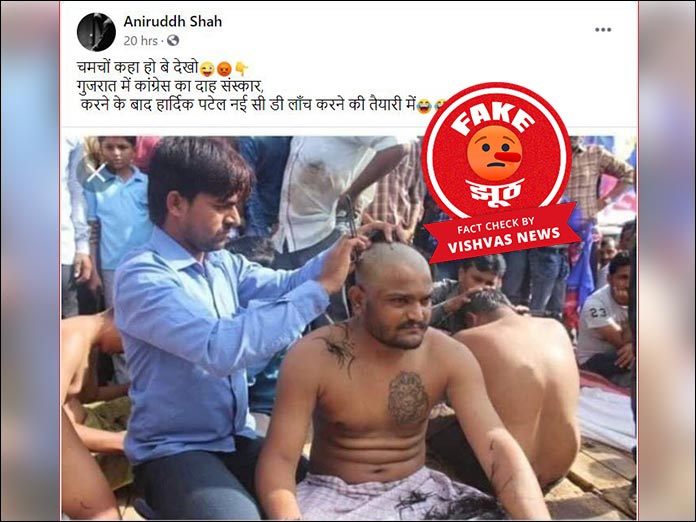 Vishvas News (New Delhi): A picture of Congress leader Hardik Patel is going viral on social media. In the picture, Hardik Patel can be seen getting his head shaved. It is linking the photo with the defeat of Congress in the recently held elections.

Facebook user Anirudh Shah uploaded the image of Hardik Patel on March 4, writing: ‘Where are you.. see after cremating Congress in Gujarat Hardik Patel ready to launch new CD.’

Vishvas News searched the photo using the Google reverse image search tool. We found this picture on several news reports published in 2017. On May 23, 2017, the News18 website published a report with the original photo showing Hardik Patel getting his head shaved. The report stated that Hardik Patel along with 50 of his supporters got their heads tonsured, alleging “atrocities” against their community by the BJP government, and launched a ‘march for justice’.

“Along with the 50 PAAS members, I decided to get our heads shaved to highlight the atrocities committed by this government on our community in the last two years. Now, we are embarking on the Nyay Yatra to seek justice,” Hardik told reporters, as per the report. The video was uploaded by ABP News on its YouTube channel on May 22, 2017.

We also found the same photo on the Twitter handle of Hardik Patel on the tweet done on May 21, 2017.

Vishvas contacted Prashanth Nema, a senior journalist from Gujarat regarding the viral picture. This is an old photo. At that time Hardik Patel, along with 50 of his colleagues, shaved their heads. The viral claim is false.

We scanned the profile of the Facebook user Anirudh Shah who shared the viral post. We found that the used is based out of Cuttack, Odisha.

Conclusion: Vishvas News investigated the viral post and found that the viral picture of Hardik Patel is from May 2017 and is not recent. The post is going viral with the fake claim.