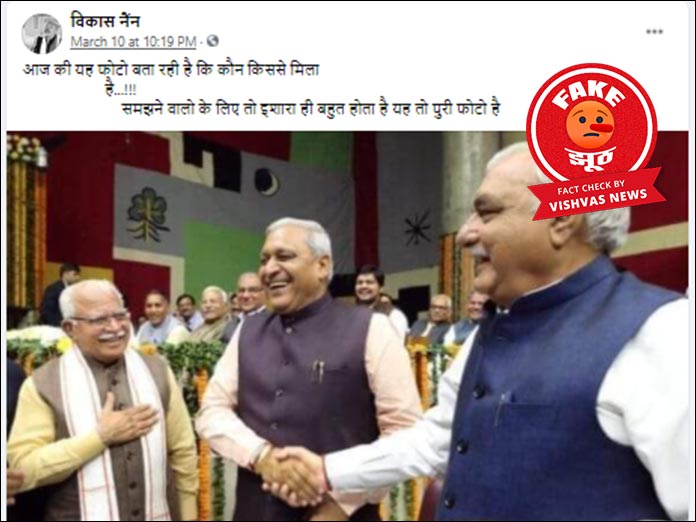 New Delhi Vishvas News. An image of Haryana Chief Minister Manohar Lal Khattar and ex-CM Bhupendra Singh Hooda laughing together, is viral on social media with the claim that this image was taken on March 10, 2021. User is trying to link this old picture with the trust vote held on March 10.

Vishvas News found in its investigation that the viral claim is false. Viral photo is over a year old.

The archive link of the post can be seen here.

We also found this picture in a deccanherald.com report. According to the news published on 26 November 2019, the picture was taken when Ranbir Singh Gangwa Prajapati was congratulated by Chief Minister Manohar Lal Khattar and former Chief Minister Bhupendra Singh Hooda on becoming deputy speaker of Haryana Legislative Assembly.

For further confirmation, we contacted Sunil Jha, the Haryana reporter of Jagran. He said, “This picture is old. The picture is of 2019, when Ranbir Singh Gangwa Prajapati was congratulated by Chief Minister Manohar Lal Khattar and former Chief Minister Bhupendra Hooda on becoming deputy speaker of Haryana Assembly.

This post was shared on Facebook by a user Vikas Nain. The user lives in Haryana and this profile was created in 2016.

Conclusion: Vishvas News in its investigation found that the viral picture is of 2019. It has nothing to do with the no confidence motion in Haryana.