This picture of CM Yogi and Mulayam’s family meeting is almost three years old. The viral picture has nothing to do with the results of the Uttar Pradesh Assembly Elections 2022. 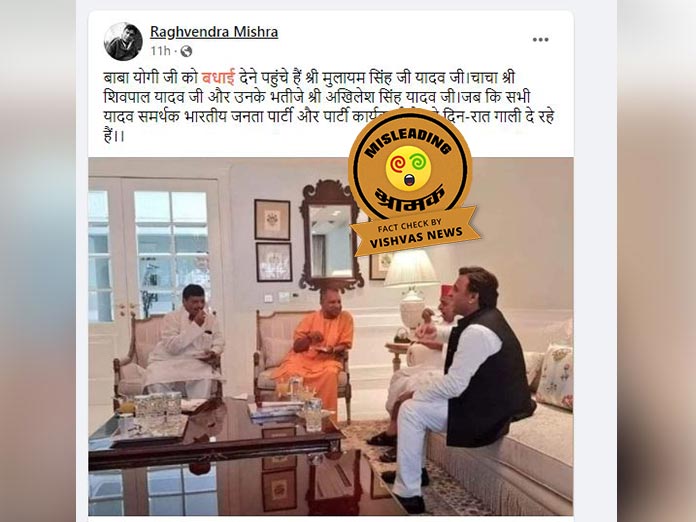 New Delhi (Vishvas News). A picture of CM Yogi and Mulayam Singh Yadav’s family is viral on social media. In the picture, Mulayam Singh Yadav, Akhilesh Yadav and Shivpal Yadav and Yogi Adityanath can be seen having tea together. The post is claiming that after BJP’s victory in Uttar Pradesh elections, Mulayam Singh Yadav along with his family visited Yogi Adityanath and congratulated him. Vishvas News in its investigation found that the claim is false. This picture of CM Yogi and Mulayam’s family meeting is almost three years old. The viral picture has nothing to do with the results of the 2022 Uttar Pradesh Assembly Elections.

To know the truth of the viral claim, we searched the image using Google reverse image. We found a report related to the viral claim published on the website of Dainik Jagran on 10 June 2019. According to the information given in the report, Mulayam Singh Yadav was admitted to Dr. Ram Manohar Lohia Institute of Medical Sciences due to increasing sugar level. He was sent to his residence the next morning after his health improved. CM Yogi Adityanath had visited him at his residence on Vikramaditya Marg to know about his health. This picture was taken during that visit. Akhilesh and Shivpal were also present there at that time.

On the basis of the information we found here, we searched on Google through some keywords. We found the viral picture uploaded on CM Yogi’s official Twitter on 10 June 2019. The caption read,” meeting the former Chief Minister of the state and founder of Samajwadi Party, Shri Mulayam Singh Yadav ji at his residence today and inquired about his well being. I pray to God that he gets a speedy recovery.”

For more information, we contacted Dainik Jagran’s Uttar Pradesh digital in-charge Dharmendra Kumar Pandey. He told us that the viral claim is false. The viral picture is almost three years old. Which is now being shared with the wrong claim.

In the social scanning of user, we found that the user is followed by 370 people and he has 1,353 friends on Facebook. Raghvendra Mishra is a resident of Azamgarh, Uttar Pradesh.

Conclusion: This picture of CM Yogi and Mulayam’s family meeting is almost three years old. The viral picture has nothing to do with the results of the Uttar Pradesh Assembly Elections 2022.