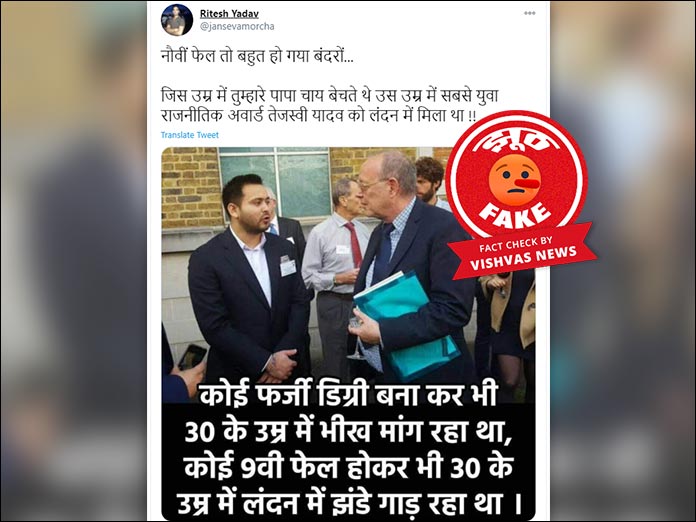 New Delhi (Vishvas News). A picture of Tejashwi Yadav is viral on social media with a claim that he has received the youngest political award in London.

Vishvas News received this claim for fact check on its Fact Checking WhatsApp chatbot (+91 95992 99372). Vishvas News investigation revealed the claim is fake. The old picture of Tejashwi Yadav’s official London tour as the deputy Chief Minister of Bihar is viral with false claim.

A viral picture of Tejashwi Yadav is shared with a claim that he has received the youngest political award in London.

We also found the picture with similar claims on Twitter. Many users have shared the claim with his other pictures along with foreigners.

We searched the viral picture using Google reverse image search tool and found it in a tweet from Tejashwi Yadav’s official Twitter handle posted on 11 August 2016.  Yadav was the then deputy Chief Minister of Bihar.

Tejashwi Yadav, sharing another picture with a viral picture, reported that he attended a knowledge sharing session with members of the Institution of Civil Engineers (ICE) in London.

Yadav also gave a speech at ICE. We found the full text of his speech in his official Facebook page posted on 11 August 2016.

We also searched for the other viral photo of Tejashwi Yadav using the Google reverse image search tool. We found this picture in a report published on the website of Prabhat Khabar on 17 August 2016. It clarified that it is from a meeting of the then Deputy CM Tejashwi Yadav with the UN Economic Commission for Europe’s delegation in Geneva.

We could confirm that both the viral pictures are not from any award ceremony. We did find any authentic media reports about Tejashwi Yadav receiving Young Political Award in London.

Vishvas News contacted Amit Alok, Bihar in-charge of Jagran.com to verify the claim. He told us that the viral pictures are old and can be seen on Yadav’s official Twitter handle. He clarified that the pictures were from Yadav’s official trip to London as the deputy Chief Minister of Bihar.

Vishvas News spoke to Ashish Shukla, an international affairs expert and research fellow at the Indian Council of World Affairs (ICWA).  Shukla told us that the ICE is an institution supporting civil engineers and technicians. It works in the field of engineering and its activities, awards etc and not with politics.

We also searched the official website of ICE. We could not find any information related to any award related to politics on this website.

Conclusion: Tejashwi Yadav’s old picture of on an official visit to London in August 2016 is viral with fake claim.