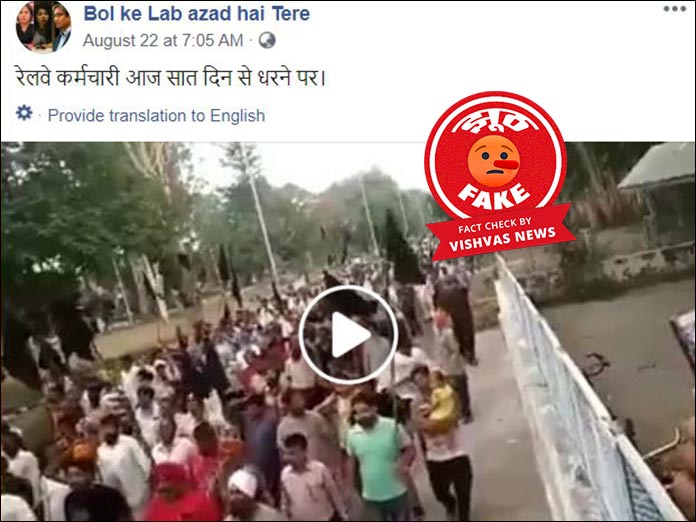 New Delhi (Vishvas News). A video of a rally is viral on Facebook, Twitter and WhatsApp with a claim that railway employees have gone on a seven-day strike.

Vishvas News investigation revealed the claim to be fake. The video is of a protest employees of the Rail Coach Factory in Kapurthala in 2019.

Vishvas News first observed the viral video carefully. A huge crowd was shouting slogans on the road. We uploaded viral videos to the InVID tool and extracted many keyframes for reverse image.

We found the viral video on The Tribune’s YouTube channel. Uploaded on 9 July 2019, this video was described as rally by railway coach factory employees to protest against privatization in Kapurthala. The  video can be seen here.

After this, we took the help of Google search. With different keywords, we started searching for news related to Kapurthala. We found a news on Dainik Jagran’s website jagran.com.

We contacted Punjabi Jagran’s associate Kapurthala District Incharge Sukhpal Singh to verify the video.  “This video is more than a year old. It was a rally by workers protesting against the privatization of Kapurthala railway coach factory. Thousands of people attended this rally, ” Singh told us on call.

Social scanning of the Facebook page ‘Bol ke Lab azad hai Tere’ revealed that it is active since 14 December 2018 and has more than 18,000 followers.

Conclusion: The video is of a protest by employees of the Rail Coach Factory in Kapurthala in 2019 and is not of any recent event.