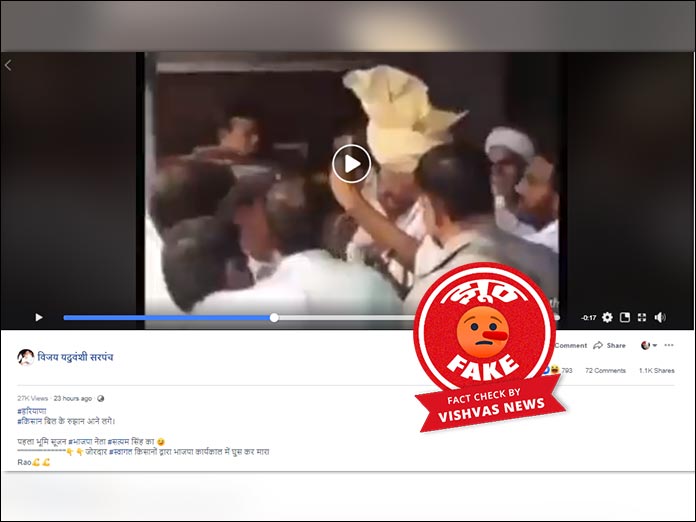 New Delhi (Vishvas Team).   A viral video on social media is shared with a claim that Haryana farmers attacked a BJP leader. Several users shared the video claiming with names of BJP leaders like Satyam Singh and Rajkumar Saini.

Vishvas News investigation revealed the claim is fake and the video is about 4 years old. The video was captured when some people threw ink on former BJP MP Rajkumar Saini, from Kurukshetra.

We tried to find this video on Internet using keyword search.  We found this video uploaded by Punjab Kesari’s YouTube channel on November 7, 2016. The description clarified that few boys sprinkled ink on BJP MP Saini.

We also found this video on the YouTube channel of Kadak News. The description reads, “The video of BJP MP Rajkumar Saini ink case has gone viral on social media. In the video, we can see a man throwing ink on Saini…”

We could confirm that the video is old and it was of an incident involving Rajkumar Saini.

According to a news report published on Jagran.com on 13 November 2016 where Saini has told that he felt threatened after the ink attack.

We also accessed a news article published in the patrika website on 16 October 2016 about the same incident.

We contacted our colleague and Dainik Jagran’s Kurukshetra Incharge Jagmahendra Saroha to verify the claim.  “ This video is from the time when Saini was an MP. The video is old. He has not publicly appeared on stage since the assembly elections,” said Saroha.

Social scanning of the Facebook user Vijay Yaduvanshi who shared this viral video revealed that he has 8,707 followers.

Conclusion: The video of youth throwing ink on MP Saini in 2016 is viral with fake claim as farmers attack on BJP leader.