The viral claim is fake. The video of people raising slogans against Pakistan is from Ganpati idol immersion ceremony in Thane in 2018. 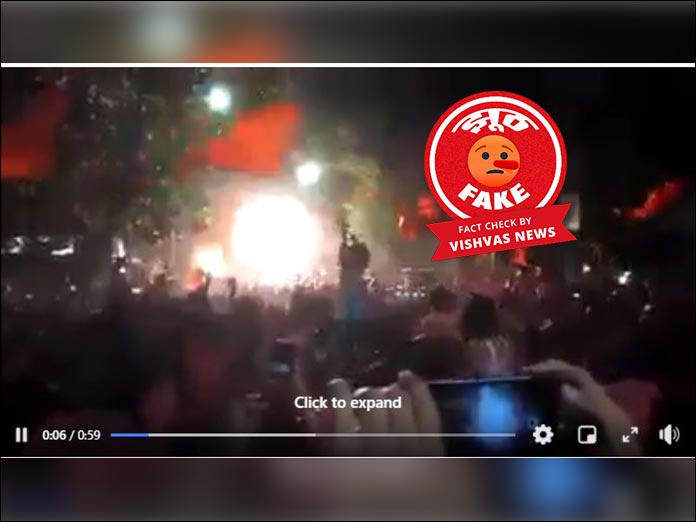 Vishvas News investigation revealed the claim is fake. The viral video is from Ganapati idol immersion ceremony in Thane.

Facebook page Save Hinduism, sharing a viral video (archive link ), of people shouting slogans against Pakistan waving the saffron flag claimed it to be from JNU.

Several other users have shared this video with similar claims on different social media platforms.

We first uploaded the viral video to the InVID tool and extracted keyframes. We searched them on the Internet using Google reverse image search tool. We found this video uploaded by the Limra Times YouTube channel on 4 October 2018 describing it as from Thane, where were people raised slogans against Pakistan.

We could identify reporter’s contact number in the video. Unfortunately, we could not connect to the reporter as the number was out of service.

We also found the long version of the viral video uploaded by Chetan Ware in YouTube on 29 September 2018 with description that it is from Ganesh Visarjan in Thane West.

Vishvas News contacted Saket Moon, Vice President of JNUSU for verification. Denying the viral claim, Moon told us that the video is not associated with the JNU campus.

Another student Vikas Patel, who recently passed from JNU and is awaiting admission for PhD course, also said that the video is not from JNU.

We also identified that a large number of people gathering in the video are without facemask, confirming the video was captured before corona pandemic.

The Facebook page that shared the viral claim has around 5,000 followers.

Conclusion: The viral claim is fake. The video of people raising slogans against Pakistan is from Ganpati idol immersion ceremony in Thane in 2018.