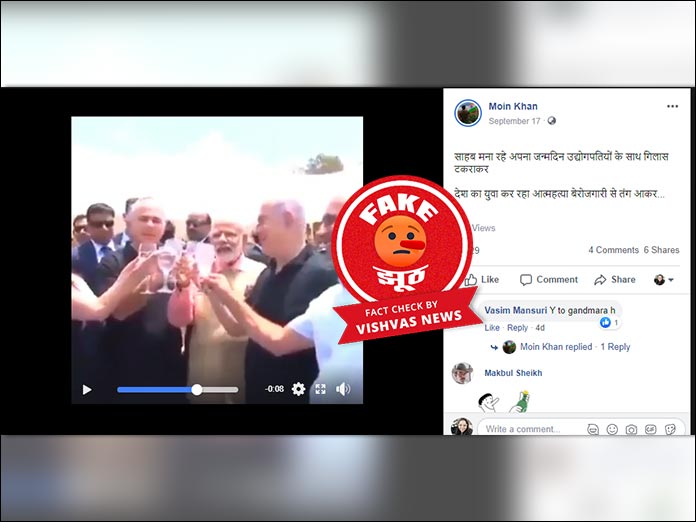 New Delhi (Vishvas Team). A viral video on social media shows PM Modi and many other people holding a glass and drinking something. It is shared with a claim that PM is celebrating his birthday with industrialists.

Vishvas News investigation revealed the claim is fake. The video is of PM Modi drinking seawater filtered by the GalMobile Water Filtration Plant during his visit to Israel in 2017. The video is not of his birthday celebration as stated in the viral claim.

In a viral video, PM Modi can be seen drinking something in a glass along with some people. The video is shared with a claim, “Sir is celebrating his birthday by hitting a glass with industrialists… ”

The archived version of post can be seen here.

We extracted keyframes of this video using InVID tool and then searched them on Internet with Google reverse image search tool. We found this viral video uploaded on Doordarshan ‘s official YouTube channel on 6 July 2017. The description reads, “On the last day of his visit to Israel, Prime Minister Narendra Modi along with his Israeli counterpart Benjamin Netanyahu visited Dor beach where he was shown a state-of-the-art mobile de-salination plan…”

As Prime Minister Modi’s birthday is on 17 September, we could confirm that the video is viral with fake claims.

Facebook user Moin Khan is one among the many users who shared the video and social scanning of his profile reavealed that he is from Udaipur, Rajasthan and has 4,970 friends on facebook.

Conclusion: The viral claim is fake. The video is of PM Modi drinking seawater filtered by the GalMobile Water Filtration Plant during his visit to Israel in 2017 and not of his birthday celebration.