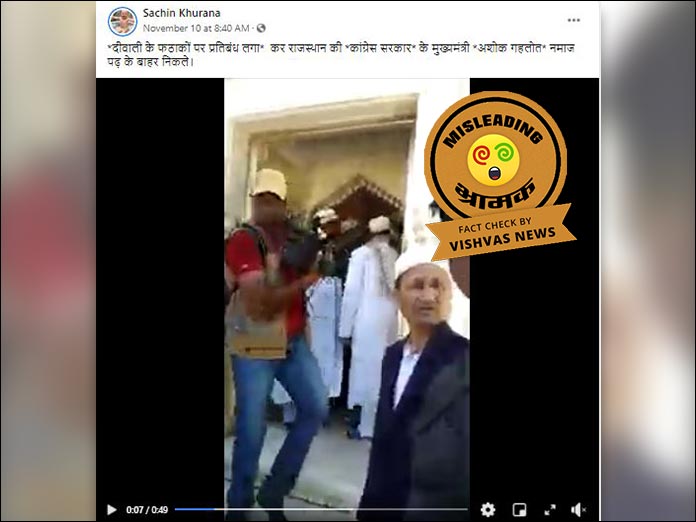 New Delhi (Vishvas News). A video of Rajasthan Chief Minister Ashok Gehlot stepping out from a dargah is viral on social media with a claim that he went to offer prayers in there after banning firecrackers in the state for Diwali.

Vishvas News investigation revealed the claim is misleading. The old video of Gehlot visiting Dargah in Dungarpur is viral as recent.

A viral video of Rajasthan Chief Minister Ashok Gehlot stepping out of a dargah is shared with a claim that he offered Namaz at Dargah after banning firecrackers during Diwali. The archive link of the post can be seen here .

We first uploaded the viral video to the InVID tool and extracted keyframes. We searched them on the Internet using Google reverse image search tool. We found the viral clips of this video uploaded by News 53 Network  YouTube channel on 28 January 2019 with description, “Ashok Gehlot Rajasthan CM visited the tomb of Syedi Fakhruddin Shaheed in Galiakot today to pay Homage.”

We also found this video by First India News Rajasthan YouTube channel uploaded over the same time in January clarifying about Gehlot’s visit to Galiakot Mazar .

Vishvas News contacted Narendra Sharma, Jagran’s Rajasthan correspondent to verify the claim.  “This video is from January 2019 when Ashok Gehlot visited Dungarpur. He went to Galiakot and offered prayers in some temples and also at the Fakhruddin tomb. The video is of Fakhruddin’s dargah,” said Kumar.

Facebook user Sachin Khurana is one among the many users who had shared the viral post and social scanning of the user revealed that he is a resident of Muzaffarnagar and 779 followers on Facebook.

Conclusion: The viral post is misleading. The old video of Rajasthan Chief Minister Ashok Gehlot visiting a dargah in Dungarpur is now viral.