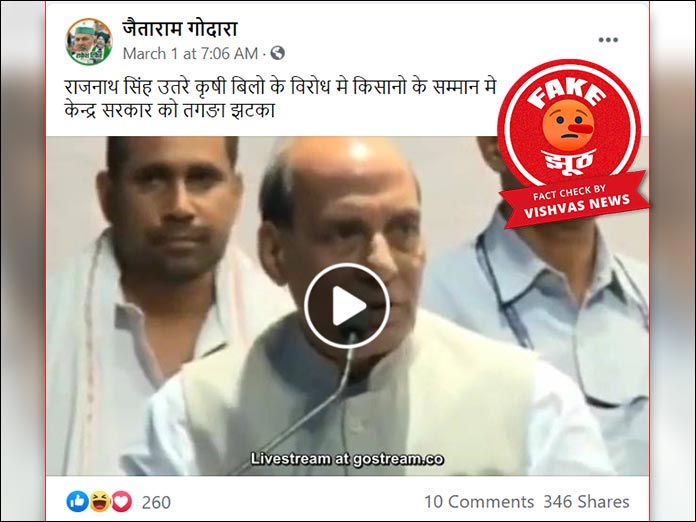 Vishvas News investigated and found the viral post to be fake. The 2015 video of Rajnath Singh is going viral now with fake claim.

On March 1, Facebook user Jaitaram Godara uploaded an old video of Rajnath Singh, claiming: ‘Rajnath Singh gives a setback to the central government while speaking with farmers against the against the farm bills.’

Vishvas News carefully observed the 10-minute video and it was clear that Rajnath Singh was speaking at an event organized on the birth anniversary of farmer leader Mahendra Singh.

We searched the video related to the program on YouTube using various keywords and found the original video on the official YouTube channel of the BJP. In this original video of 18:44 minutes, the portion after 5:46 minutes is cropped and now being made viral.

The original video was uploaded on October 6, 2015. In the video, it was mentioned that Rajnath Singh had arrived at an event related to the birth anniversary of Mahendra Singh Tikait in Delhi.

Vishvas News contacted Rajesh Tripathi, spokesperson of BJP in Uttar Pradesh. He said that this video of senior party leader Rajnath Singh is old. Some people are deliberately making it viral with fake claims.

We scanned the profile of the Facebook user Jaitaram Godara who shared the viral post and found that the user is us followed by 1300 users.

Conclusion: Vishvas News investigated and found the viral post to be fake. The 2015 video of Rajnath Singh is going viral now with fake claim.