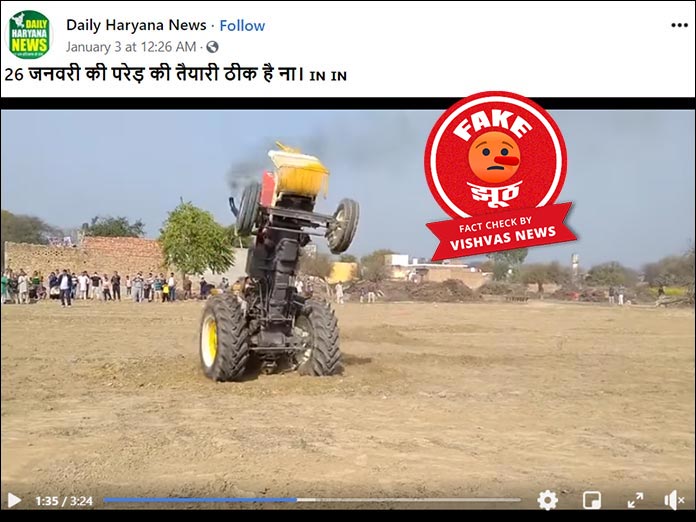 New Delhi (Vishvas News): A video of a tractor stunt is going viral on social media. As per the claim alongside the video, a young farmer is preparing for a tractor stunt for Republic Day. In the viral video, a young man can be seen doing dangerous stunts with a tractor. Vishvas News investigated and found that the video is of February 2020 and has nothing to do with the ongoing farmers protest or Republic Day preparations.

Vishvas News searched the viral video using the InVID tool and extracted the screengrabs. While performing Google reverse image search of the screengrabs, we found the same video uploaded on Youtube on February 11, 2020.

We searched on Google using appropriate keywords and found that the man performing the stunts is Subhash Lathwal. After watching his videos on Youtube, we found that Subhash Lathwal is a resident of Mundlana village of Sonepat.

Vishvas News contacted Subhash Lathwal directly. He told us that we are with our elders in the farmers movement, but this video is old. This is an old video that was recorded during a competition.

During our investigation, we also came to know that the organizations involved in the farmers movement have announced the Tractor Parade of farmers in Delhi on January 26.

We scanned the Facebook page Daily Haryana News that shared the viral post and found that the page has around 38000 followers.

Conclusion: Vishvas News investigated and found that the video is of February 2020 and has nothing to do with the ongoing farmers protest or Republic Day preparations.