Fact Check: Photo of Delhi’s Kotla Mosque is being shared as Ayodhya’s 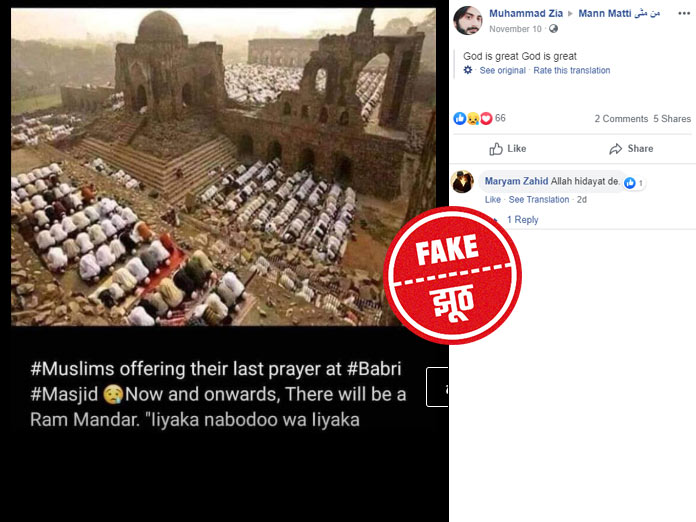 New Delhi (Team Vishvas News.) A photo is going viral on social media in which people can be seen offering Namaz in a ruined old building. It is being claimed that this photo is of Babri Masjid in Ayodhya and after the Supreme Court’s decision, Namaz is being offered here for the last time. We found in our investigation that this claim is false. The viral photo is not of Ayodhya, but of Jami Masjid of Feroz Shah Kotla in Delhi and is of 2008.

In the viral photo, some people can be seen reciting Namaz in a ruined building. It is being claimed that this is the picture of people performing Namaz for the last time in Babri Masjid in Ayodhya after the Supreme Court verdict.

Let us tell you that in the long-running Ram Janmabhoomi-Babri Masjid case judgment, the Supreme Court on November 9 directed that the controversial land in Ayodhya be given to Hindus for the Ram temple and alternate space will be provided to the Sunni Waqf Board to build the mosque.

To examine this post, we first took a screenshot of this picture and searched it on Google reverse image. After a little research, we found these pictures in international news agency AP i.e. Associate Press Images. This photo was uploaded for the first time on 9 December 2008 by AP. According to the description written with the picture, this picture is of Kotla Masjid on 9 December 2008 when people offered prayers on the day of Bakrid. This picture was taken by a photographer named Gurinder Osan.

We spoke to Gurinder Osan for confirmation. He told us, “This picture is not of Ayodhya, but of Kotla. At that time, I took this picture for Associate Press on the day of Bakrid. ” Gurinder is now associated with Hindustan Times.

However, after searching the internet, we found an ESPN article which had a photo of Kotla Mosque. On seeing the picture, it can be seen that the Jami Masjid of Kotla has been renovated.

We also got the news of the renovation of this mosque on Hindustan Times.

Many people are sharing this post on various social media platforms. One of them is a Facebook profile named Muhammad Zia. On scanning this profile, it can be seen that the user has been posting updates from the city of Multan in Pakistan which indicates that he could be a citizen of the neighbouring country.

Conclusion: We found in our investigation that this claim is false. The viral photo is not of Ayodhya, but of Jami Masjid of Feroz Shah Kotla in Delhi and was clicked in 2008.