The viral post with the claim that 15 Hindu girls and 15 Muslim boys were arrested in in the raid on Bhopal’s hookah bar is fake. 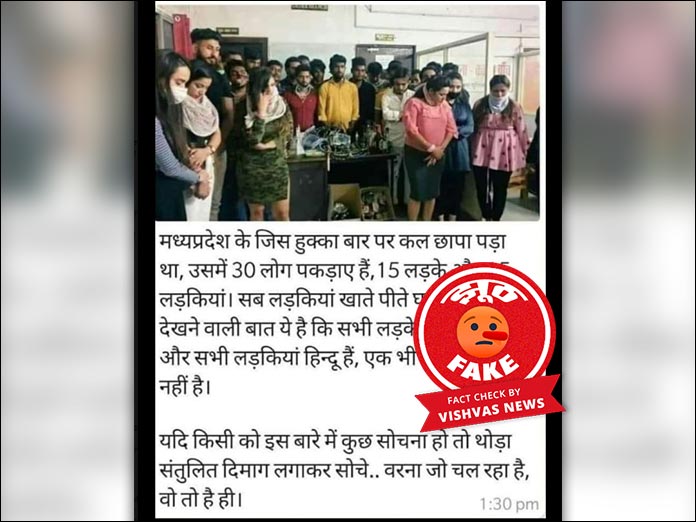 New Delhi (Vishvas News). The picture of a raid in a hookah lounge in Bhopal, Madhya Pradesh, is viral on social media with a claim that out of 30 people arrested, 15 girls were Hindus and 15 boys were Muslims.

Vishvas News investigation revealed the claim to be fake.

Facebook user Chandrmagiri Baba shared the picture (archive link ) that reads, “Thirty people have been caught in the hookah bar in Madhya Pradesh, which was raided yesterday. Fifteen boys and 15 girls were caught. …all boys are Muslims and all girls are Hindus. There is not a single Muslim girl… “

More than 300 people have shared this post with false claims.

A news report found on the Internet search with keywords “Madhya Pradesh Hookah Bar Raid” has details of this incident. According to Live Hindustan.com, “Police raided a hookah lounge and detained 32 people for violating the lockdown. According to the police, in the lounge, hookah and liquor were being consumed along with organizing the birthday party in violation of Section 144.”

The picture included in the news is the picture shared with false claims.

The video bulletin uploaded on July 23 on the verified YouTube channel of IHN News also has the details of the incident.

However, none of the news reports gave us information about the names of the detained people, which would allow us to find out the truth in the claim made in the viral post.

We connected to Anand Dubey, our colleague and Senior Reporter (Crime) of Navdunia in Bhopal. Dubey clarified to us that this is incident happened in July and the Crime Branch detained 32 people for violating the lockdown.

We contacted the Bhopal Police for further investigation. Bhopal Police spokesperson Naveen Kumar provided a list of names of the arrested people to Vishvas News. He denied the viral claims shared on social media. “A total of 33 people were detained in the related case, including 7 girls and 26 boys. Six of the seven girls were Hindu, while one was a Christian. At the same time, 19 of the 26 boys were Muslims and seven were Hindus,” said Kumar.

The viral post claimed that out of the 30 arrested, 15 were Hindu girls and 15 were Muslim boys. Kumar shared the press release issued by the police in this case, which holds the details of all the accused taken into custody.

The profile of the user who shares the viral post seems to be inspired by the ideology.

Conclusion: The viral post with the claim that 15 Hindu girls and 15 Muslim boys were arrested in in the raid on Bhopal’s hookah bar is fake.