The viral claim turned out to be misleading in the investigation of Vishvas News. The viral picture is not of an anchor from Qatar, but of a news anchor from Afghanistan, which is now being shared with the wrong claim. 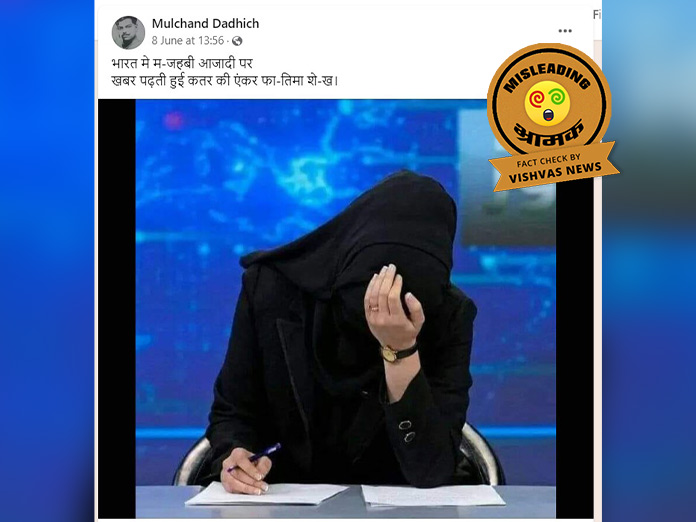 New Delhi (Vishvas News): Amidst the outage shown by many middle-estern countries in the Nupur Sharma controversy, a picture of a female TV anchor wearing a burqa is going viral on social media. It is being claimed that this burqa-clad Qatari news anchor Fatima Sheikh, expressing her concern over religious freedom in India.
Vishvas News in its investigation found that the viral claim is misleading. The picture going viral is not of Qatar’s anchor, but of Khatera Ahmadi, a news anchor from Afghanistan.

To know the truth of the viral claim, we searched the picture through Google reverse image. We found an original picture uploaded on AP Images.

According to the information given in the caption, this picture is of Afghan news anchor Khatera Ahmadi.
Caption reads, “TV anchor Khatereh Ahmadi bows her head while wearing a face covering as she reads the news on TOLO NEWS, in Kabul, Afghanistan, Sunday, May 22, 2022. Afghanistan’s Taliban rulers have begun enforcing an order requiring all female TV news anchors in the country to cover their faces while on-air. The move Sunday is part of a hard-line shift drawing condemnation from rights activists. (AP Photo/Ebrahim Noroozi).”

We started searching on Google through relevant keywords. Meanwhile, we found a tweet on the official Twitter account of Tolo News Director Saad Mohseni. Sharing this picture on 25 May 2022, Saad Mohseni wrote in the caption, “For those wondering about this iconic photo: here we have Khatera Ahmadi, one of our news presenters, preparing for a news bulletin – exhausted. Difficult breathing with a face covering.” #FreeHerFace ⁦

We contacted Afghan journalist Omid Farooq for more information. He told us, “The viral claim is misleading. She is Khatera Ahmadi, the news anchor of Tolo TV. Tolo News director Saad Mohseni also shared this picture.”

At the end of the investigation, Vishvas News did a social scanning of the Facebook user who shared the false claim. The Facebook user is followed by 500 people, while Mulchand Dadhich has 366 friends on Facebook.

Conclusion: The viral claim turned out to be misleading in the investigation of Vishvas News. The viral picture is not of an anchor from Qatar, but of a news anchor from Afghanistan, which is now being shared with the wrong claim.