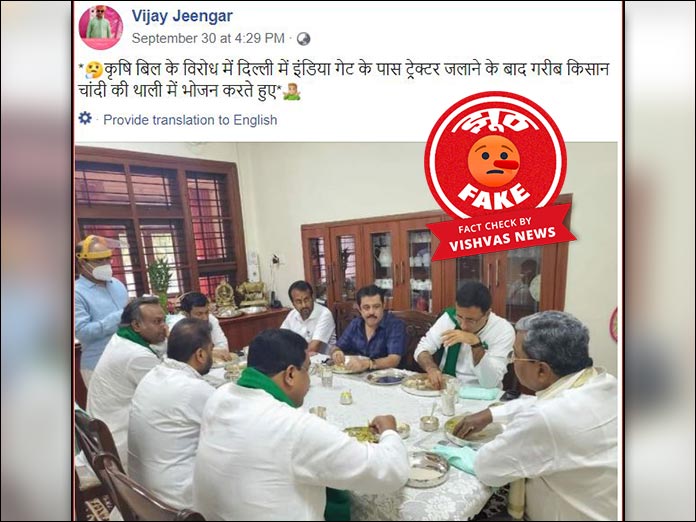 New Delhi (Vishvas News). A picture of senior Congress leader Randeep Singh Surjewala dining with seven members is viral on social media with a claim that poor farmers are eating in silver plate after burning a tractor in protest against the agricultural bill near India Gate.

Vishvas News investigation revealed the viral claim is fake. The men in the picture are not farmers but Karnataka Congress leaders including former Chief Minister Siddaramaiah and Secretary Randeep Surjewala.

Facebook user Vijay Jeengar uploaded a picture on 30 September, claiming, “Poor farmers are eating from silver plate after burning a tractor near India Gate in Delhi to protest against the agriculture bill.”

We searched for the picture on the Internet using Google reverse image search tool to identify the source. We found this picture on many websites and social media accounts.

We found an article published with the viral picture by Vijaykarnataka news website on September 28. It stated that opposition leader Siddaramaiah hosted lunch on a silver platter for AICC general secretary Ranjeep Singh Surjewala.

We found this picture in a tweet by BZ Jamir Ahmed Khan posted on 28 September. The caption in the tweet clarified to us that Khan was having lunch at former Karnataka Chief Minister Siddaramaiah’s house in Bengaluru with Congress General Secretary Randeep Surjewala.

We contacted Akhilesh Pratap Singh, Congress spokesperson to verify the claim.  “There is no truth in the post. The viral claim is fake. It is a conspiracy by political opponents,” said Pratap.

Social scanning of the FB user who shared the viral post revealed that he is a resident of Jodhpur, Rajasthan.

Conclusion: The viral claim is fake. The picture of Karnataka Congress leaders dining together is viral with fake claims.