Fact Check: Pictures From Abroad Are Being Shared As Assam Detention Centers 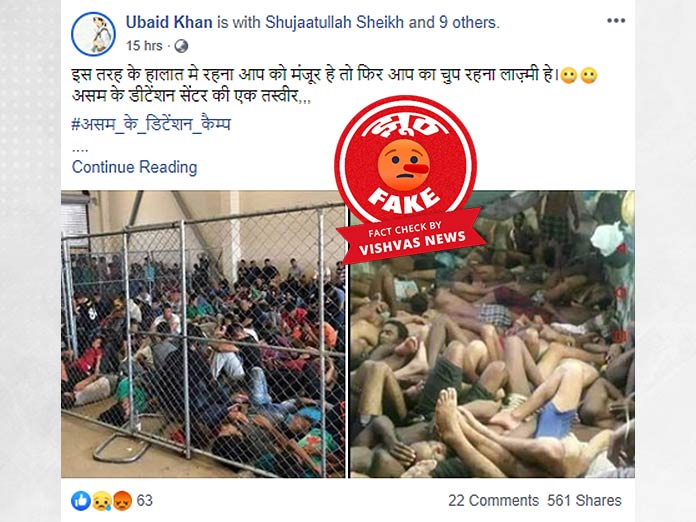 New Delhi Vishvas Team. Amidst Assam protests against NRC and Citizenship Amendment Act, many rumors about Assam are going viral on social media. Some social media users are now sharing some disturbing pictures claiming that these are the photos of the Detention Center in Assam. In these pictures, many people can be seen trapped in small jail cells. We found in our investigation that these pictures have nothing to do with Assam. The first photo is of a prison in the Dominican Republic and the rest two photos are of immigration detention centers in Texas, USA.

The viral post has three photos. In the first picture, many men can be seen lying on top of each other in a confined jail cell. In the second and third picture, many people, including women and children, are seen sitting in a small place. The description of the post reads, “If it is acceptable for you to live under such circumstances, then you are bound to remain silent. A picture of Detention Center of Assam ,,,”

To investigate this post, we decided to examine all these photos one by one. When we took a screenshot of the first picture and searched it on Google reverse image, we found a webpage of El Tiempo, a Colombian newspaper, where this picture was used. According to the news, this photo is of the inmates of the La Romana prison in Dominican Republic. We found this picture on many other websites with the same claim.

When we searched the second image on Google reverse image, we found a news report from The Global Post, in which this picture was used. According to the news, this photo is of a migrant detention center in Texas, USA. We also found this picture in the Washington Post website.

When we searched the third image on Google reverse image, we found this picture on Vox.com, which read “Family detained in a crowded cell at a border patrol facility in Texas on June 11, 2019.”

After this, we spoke to Kuldhar Saikia, DGP (Director General of Police) of Assam for further confirmation. He said that none of these photographs are from Assam.

Many people are sharing this post on social media. One of them is a Facebook user named Jamshed Wahab. According to the Facebook profile of this user, he is from Kanpur and has 1,624 Facebook followers.

Conclusion: In our investigation, we found that the viral pictures are not from Assam. The first picture is of the prison cell of Dominican Republic. The second and third pictures are of the migration detention centers of America.