Fact Check: PM did not wave Pakistani flag; the viral image is photoshopped 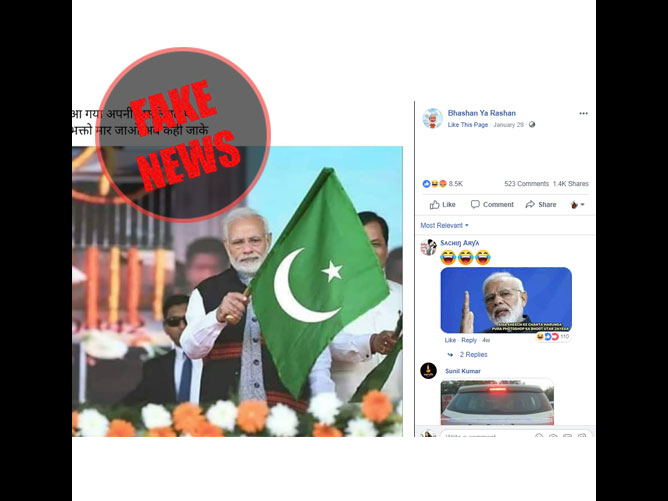 New Delhi (Team Vishvas).  A picture is making rounds on Social Madia in which Prime Minister Narendra Modi can be seen waving a green flag with a white crescent moon and star on it, very similar to the Pakistan national flag.

When we fact checked the image and put it through the Google Reverse Image Search, we found that the viral picture is FAKE.

We were able to track down the original source of the image. We found the original picture tweeted by DD News on December 25, 2018, when PM Modi inaugurated the Bogibeel bridge in Assam over the Brahmaputra river and flag off the rail network on the bridge.

We have put together the original and photoshopped images for you so that you can see the difference for yourself. It is clear that the viral image is morphed with the graphic of moon and star to make it look like a Pakistani flag.

The photo was posted by a Facebook page called ‘Bhashan Ya Rashan’ on 29 January. The Hindi text along with the photo says, “आ गया अपनी असलियत पे, भक्तो मार जाओ अब कही जाके”, which translates to: “He has shown his real self, Bhakts, go and die somewhere now.” We searched the page that shared this image using Stalkscan tool and found that the page is followed by 19,153 people.  Most of the posts shared on this page are against a particular political party.

Conclusion: In our investigation, we found that the image being circulated is fake. Prime Minister Narendra Modi was showing the green flag to the train while he inaugurated the Bogibeel bridge in Assam.