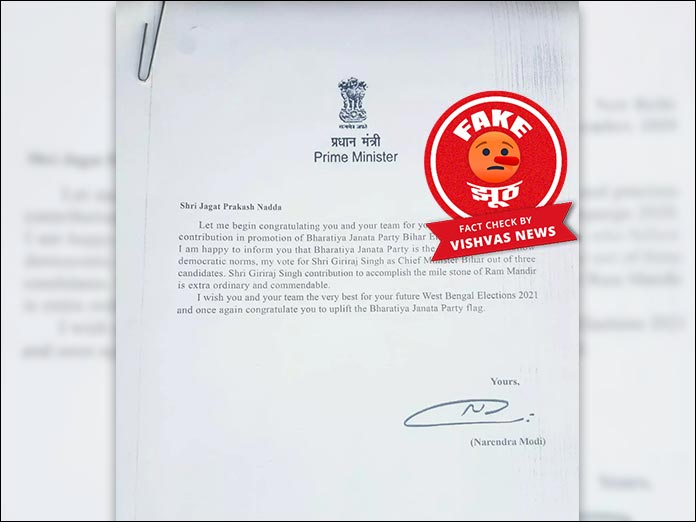 New Delhi (Vishvas News). After the Bihar Assembly election results, a letter allegedly from Prime Minister Narendra Modi voting for Union Minister Giriraj Singh as the Chief Minister of Bihar among the three candidates is viral on social media.

Vishvas News received this claim for fact check on its Fact Checking WhatsApp chatbot (+91 95992 99372). Vishvas News investigation revealed the claim is fake. The BJP spokesperson had clarified the letter allegedly from PM Modi is fake.

Several users (archive link ) have shared a picture of a letter allegedly from the Prime Minister that reads, “Let me begin congratulating you and your team for your effective and precious contribution in  promotion of Bhartiya Janata Party Bihar Election campaign 2020. I am happy to inform you that Bharitya Janata Party is the only party who follow democratic norms, my vote for Shri Giriraj Singh as Chief Minister Bihar out of three candidates.  Shri Giriraj Singh contribution to accomplish the mile stone of Ram Mandir is extra ordinary and commendable…”

On various platforms of social media, many other users (archive link ) have shared this letter with the same claim, considering it as true.

Election Commission released Bihar election results at around 11 am on 11 November. The National Democratic Alliance (BJP-74, JD-U43, VIP-4 and HUM-4) has won 125 seats, which is more than the magic figure of 122 to form the government and the Mahagathbandhan (RJD-75, INC-19 and left parties – 16 seats) has won 110 seats.

According to an report in the  Dainik Jagran,  even though the BJP may have got more seats in the election than the JDU, Nitish Kumar will be the next Chief Minister. Sushil Modi has clarified that NDA will be form the government in Bihar once again under Nitish Kumar.

According to a report in the LiveHindustan.com, “After the election results came on Tuesday night, the Deputy Chief Minister, while speaking to reporters at the state BJP office, made it clear that the NDA had contested on the face of Nitish Kumar and there should be no doubt about it.”

We observed the viral letter for investigation. We accessed a letter from Prime Minister Narendra Modi addressed to the Indian cricketer Suresh Raina recently, which is all over the Internet since 21 August after All India Radio News’s posted on Twitter.

When compared the original PM’s letter with the viral letter, we could identify the differences in font style and PM’s signature along spelling inaccuracies.

We also noted that Prime Minister Narendra Modi wrote a public letter addressing the people of Bihar with an appeal to vote in favor of Nitish Kumar during third phase of the Bihar Assembly elections, on November 5, same as the date in the viral letter.

PM’s original letter reads, “I need the Nitish Kumar government so that there is no hindrance in the development politics in Bihar.” We could confirm that the viral letter claiming Giriraj Singh as Bihar Chief Ministerial candidate is fake.

We did not find any such news article in the news search.

Vishvas News contacted BJP spokesperson Ramsagar Singh to verify this letter.  “This letter is completely fake. There should be strict action against those who spread such viral letters… BJP’s stand is clean. From Prime Minister Narendra Modi, Home Minister and former National President Amit Shah … have repeatedly made it clear from every media platform that if the BJP wins in Bihar, Chief Minister will be Nitish Kumar.”