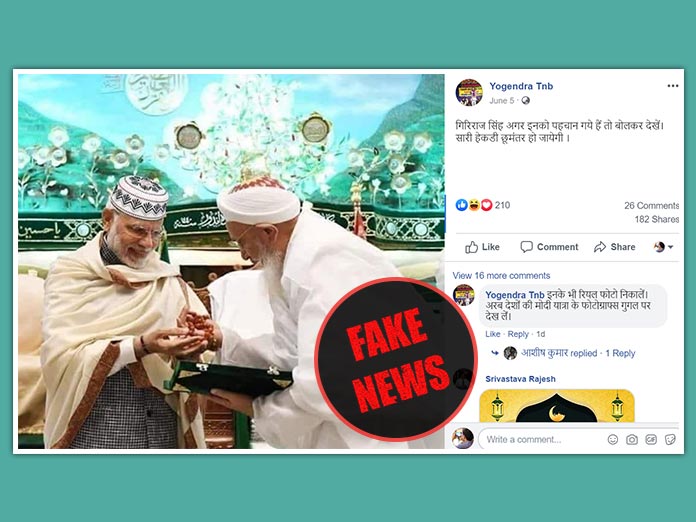 Facebook user Yogendra Tnb posted a morped picture of Prime Minister Narendra Modi along with a claim that reads in Hindi: गिरिराज सिंह अगर इनको पहचान गये हैं तो बोलकर देखें। सारी हेकडी छूमंतर हो जायेगी। (English: If Giriraj Singh has recognized him, then he should speak). The post has 210 reactions, 26 comments and 182 shares so far.

We started our investigation by reading the comments on the viral post. The users were actually debating over the picture. Some called it original whereas some said that it is morphed.

We then performed Google reverse image search to learn more about the viral picture. We found a picture on the website of hwnews.in. The photo had been used in an article published on September 14, 2018. In the article, Prime Minister Narendra Modi talked about attending an event of the Dawoodi Bohra community in Madhya Pradesh.

Now we searched the event of which the photos were uploaded. For this, we visited the official website pmindia.gov.in. As per the information available on the website, Prime Minister Narendra Modi met Bohra community 53rd religious leader Syedna Mufaddal Saifuddin at Indore’s Saifee Nagar Mosque in his bid to reach out to the Dawoodi Bohra Muslim community.

This article was original written in Hindi by Ashish Maharishi.