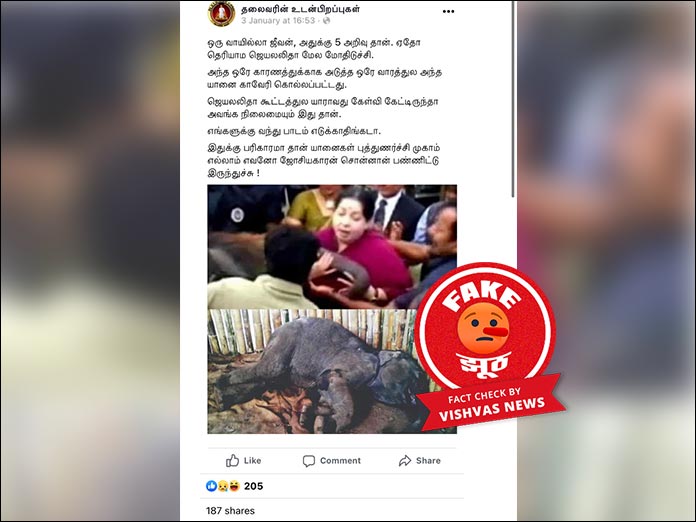 New Delhi (Vishvas News). A collage of two pictures of an elephant pushing late Tamil Nadu Chief Minister J Jayalalithaa and a carcass of an elephant is recently viral on social media with a claim that it was killed within a week after it attacked the CM.

Vishvas News investigation revealed the claim is fake. An official from the Mudumalai Tiger Reserve refuted the claims.

A picture of late Tamil Nadu Chief Minister J Jayalalithaa with an elephant in a crowd and a picture of a deceased elephant is viral on social media claiming, the elephant named Cauvery, was killed within a week after it attacked the CM. The archived version of the viral post can be seen here.

We searched on the Internet for news and found an NDTV article along with a video stating, “Tamil Nadu Chief Minister Jayalalithaa had a nasty surprise when she tried to feed a baby elephant fruits at an elephant camp in Mudumalai… The two-year-old calf pushed the Chief Minister…gave her a harder shove,” published on 31 July 2013.

We did not find any authentic sources confirming that Cauvery elephant was killed.

Vishvas News contacted Mudumalai Tiger Reserve (MTR), the caretaker for rescue elephants in Tamil Nadu for verification. “The viral post is fake. Cauvery (elephant) died of ailments several months after the incident with late Chief Minister. Moreover, the picture of a deceased elephant in the viral post is not Cauvery. It is of some other elephant we rescued from Dharmapuri,” said an official in the MTR, who didn’t wish to be named.

We also contacted Thrissur based Veterinary Surgeon Dr P B Giridas, who had treated the elephant Cauvery that time, for clarification. “The elephant was christened by late Chief Minister Jayalalithaa. The viral claim is fake. I remember, Cauvery (elephant) fell sick and was treated on water bed… It died of some infection,” doctor said.

Conclusion: The viral post is fake. Cauvery elephant that pushed late Tamil Nadu Chief Minister Jayalalithaa was not killed. It died several months after the incident due to health ailments.