Viral post claiming that the US has used picture of Mahatma Basweshwar on $100 bill is fake. 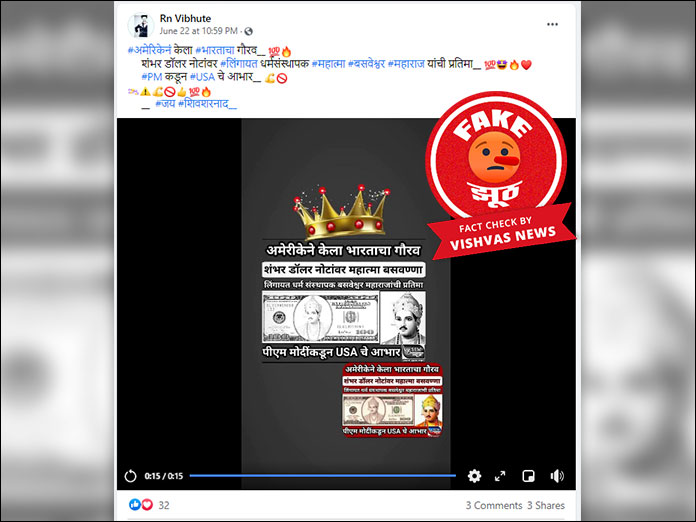 New Delhi (Vishvas News): Vishvas News came across a post which claimed that the US has honoured India by using Mahatma Basweshwar’s picture on $100 bill (note). It is also claimed in the post that Indian PM has thanked US.

Vishvas News in its investigation found the claim to be fake.

Translation: India honoured by the US. USA uses, Mahatma Basweshwar’s image on a 100 dollar bill. PM thanks USA.

Investigation:
Vishvas News started its investigation by checking the news articles. If India would have been honoured in such a way or if Mahatma Basweshwar’s picture would have been used by the USA on a $100 bill this would have definitely made to the news. However, we did not find any such news items over the internet.

We then checked the $100 bill going viral. We saw that every note being widely shared had the same serial number (CL01985909BL12). We compared it with an original $100 bill it looked exactly the same though.

Vishvas News then used the keywords, ‘Fake $100 bill generator’ to check if there’s an application or a website which creates face $100 bills. This took us to a website, ‘Make fake personalized 100 dollar bill with your face online’.

Using this website, people can make personalised $100 bills. The serial number of the other notes shown on the website was exactly same as that of the $100 bill with Mahatma Basweshwar’s picture.
It was now clear that the image was made using this website.

In the next step of investigation, Vishvas News contacted, Channavir Bhadreshwarmath who is a scholar of Sharan literature, senior journalist and an editor of ‘Basava Vani‘. He told us that the viral post claiming a $100 bill has the picture of Mahatma Basweshwar is fake. The US did not take any such step.

Vishvas News now did a social background check of the person sharing the viral post. Rn Vibhute(Babaraje), the person who shared the post is a resident of Solapur and is followed by 718 people.

Conclusion: Viral post claiming that the US has used picture of Mahatma Basweshwar on $100 bill is fake.