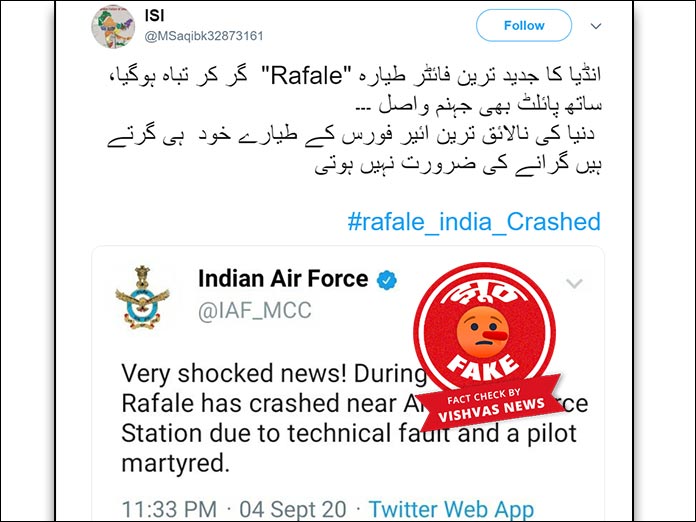 New Delhi (Vishvas Team). A viral message on social media claims a Rafale aircraft crashed near Ambala Airforce station during the exercise according to a tweet allegedly from the Airforce. It also says that a pilot was killed in the accident. Vishvas News received this message on Fact Checking WhatsApp Chatbot (+91 95992 99372).

Vishvas News investigation revealed the claim to be fake. Rafale has not crashed. The viral post claiming to be from Air Force is fake.

A tweet, allegedly from the Indian Air force says, “Very shocked news! During exercise, Rafale has crashed near Ambala Airport station due to technical fault and a pilot martyred.” The archived post can be accessed here. Several users have shared the same the alleged tweet of Indian Air Force from a Twitter handle named ISI .

In the viral post, a screenshot of an alleged tweet is posted in the name of the Air Force. This screenshot shows the Twitter handle’s address @IAF_MCC. Accordingly, this tweet about Rafale was posted on September 4 at 11:33 pm. Vishvas News first searched the Twitter handle of this name to confirm the authenticity of the account. We could confirm that @IAF_MCC address is the official Twitter handle of the Indian Air Force. This handle is active since October 2016 and has 1.6 million followers. We accessed the account on twitter for further clarifications. On September 4, a total of 6 tweets have been posted from the official Twitter handle of the Air Force. All these 6 tweets can be seen below:

We could not find any tweet about Rafale crash. We could confirm that the viral picture was created using photo editing tools. We also searched the Internet using keywords (Rafale crash ambala etc). If the Rafale fighter plane had crashed and a pilot was martyred, it would have been a breaking news. We did not receive any authentic media report.

We approached Sanjay Kumar, a former Intelligence and Information Analyst in the ministry of Home Affairs and currently an expert in Security and International Affairs at Unacademy. Describing the news as propaganda, Kumar said that Rafale is an advanced fighter aircraft. “After the entry of the state-of-the-art Rafale fighter jet in the Indian Army, many false news gone viral on social media about it. It is propaganda and we should avoid them. No Rafale aircraft has crashed in India,” Kumar said.
Social scanning of the twitter handle that shared the fake claim revealed that it is active since August 2015. We also found that it is a Pakistani Twitter handle and has 251 followers.

Conclusion: Rafale aircraft did not crash near Ambala Air force station. The viral claim shared in the name of Indian Air force is fake.