Fact check: Post claiming Tamil Nadu will be bifurcated once it has 40 districts is fake 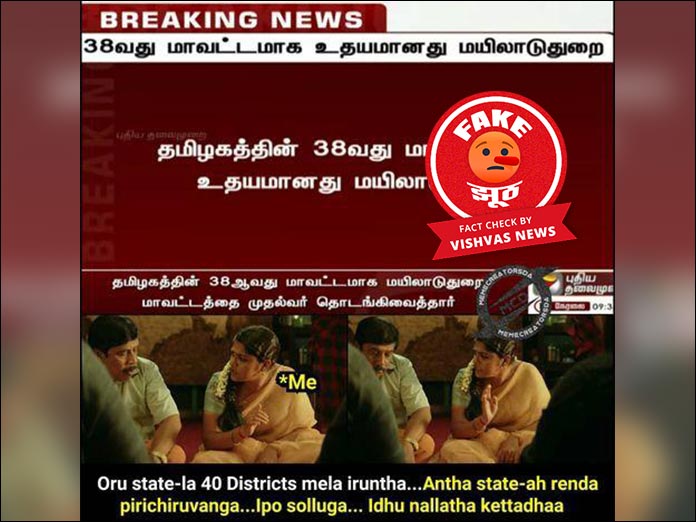 A viral meme created with a news card informing about the newly formed district of Tamil Nadu alleges that the State will be bifurcated once after the number of districts reach 40. Vishvas News spotted this meme on Whatsapp.

According to an article in the Times of India, CM announced that bifurcation of Mayiladuthurai town from Nagapattinam district under 110 Rule in the assembly on March 24.

We did not find any authentic reports on bifurcation of Tamil Nadu or any rules clarifying that a state with 40 districts should be bifurcated as we observed several states like Uttar Pradesh, Madhya Pradesh having more than 40 districts.

Vishvas News contacted the Revenue Department of Government of Tamil Nadu, in charge of bifurcation decisions in the State for verification. The office bearer from Dr Atulya Misra, Additional Chief Secretary’s office denied the viral claims. “The viral post is fake. People should not believe everything that is shared on social media. There is no such rule that a state should be bifurcated if it has 40 districts,” the official told us on call.

Conclusion: The viral post is fake. The Revenue Department, Government of Tamil Nadu, responsible for decisions on bifurcation denied the viral claims. India has many states with more than 40 districts.