Fact Check: Post claiming that lockdown will again be imposed in Assam is misleading

According to the information revealed in the Vishvas News investigation, there is no realistic basis for this viral video. Neither a minister nor the state government has expressed the possibility of a lockdown. So this viral video is misleading. 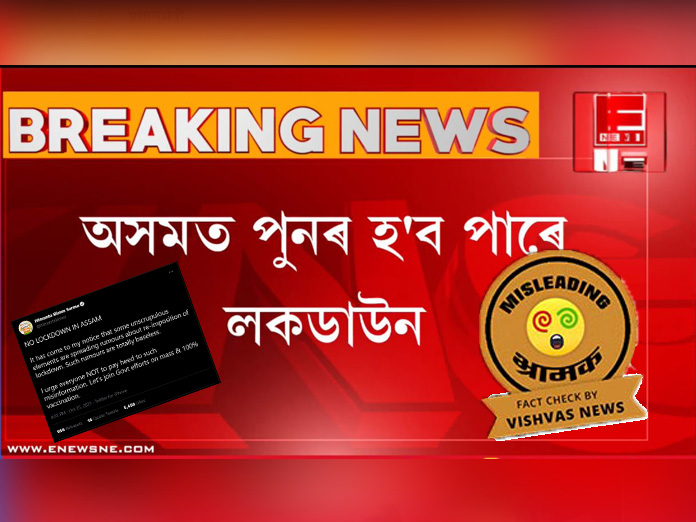 Guwahati (Vishvas News): A post is going viral on social media where a screenshot of the breaking plate of a digital portal is viral with the claim that lockdown will again be imposed in Assam. According to the investigation by Vishvas News, the post was based on a press conference. There is really no basis for this. Meanwhile the Assam Chief Minister also took to twitter to clarify that there is no lockdown planned in Assam. So this post is misleading.

However, we noticed a news on a portal called My News NE reporting that a lockdown will be imposed in Assam again.

While the news recently created a hue and cry among the people of the state, state chief Minister Dr Himanta Biswa Sharma tweeted that there was no possibility of the lockdown. It also urged people not to be alarmed by such fake news.

Vishvas News contacted journalist from The Sentinel, Pallavi Saikia in this regard and shared the video. She told us that it was completely misleading. No one has said or predicted a lockdown in Assam. This news is made only on the basis of speculation. When we scanned the Facebook profile of the portal E News NE which shared the news that Assam will be lockdown again on Facebook, we found that 362416 people followed the page. On the other hand this viral video has been watched by 103000 people and shared by 1000+ people.

Conclusion: According to the information revealed in the Vishvas News investigation, there is no realistic basis for this viral video. Neither a minister nor the state government has expressed the possibility of a lockdown. So this viral video is misleading.