Fact Check: Post claiming that money deposited by Indians in Swiss banks has increased is misleading 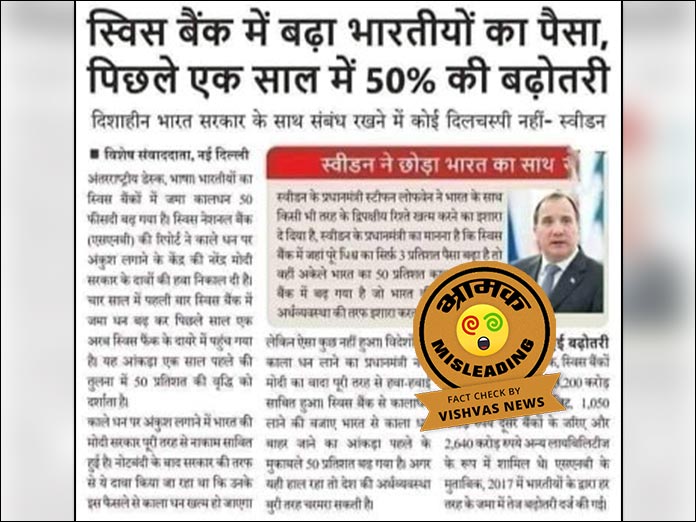 New Delhi (Vishvas News). A viral post on social media claims that black money deposited by Indians in Swiss banks has increased 50 per cent in last one year.

Vishvas News investigation revealed the claim is misleading. The old Swiss bank report of 2017 is viral as a recent one.

Sharing the viral post, social media user Chand Mohammad shared a newspaper clip and wrote, “The government has been robbed… Instead of bringing back the black money, the government is raising black money a record 50 per cent increase in 1 year.” The archived version of the post can be seen here.

“India is at the 74th place in the list of Swiss bank deposits. Last year, India was ranked 73rd with a jump of 15 places,” stated an article by Dainik Jagran published on 30 June 2019.

The claim has gone viral on social media even in the past and Vishvas News found it to be misleading.

In 2019, this claim was shared on social media and in subsequent investigation it was revealed that there was 6 per cent reduction in the money deposited by Indians in Swiss banks. According to data released by Swiss National Bank, the money deposited by Indians in these banks decreased to around Rs 6,757 crore in 2018, the lowest level of the decade.

Social scanning of the Twitter user who shared the viral claim revealed that he has more than 1,000 followers and is active since June 2019.

Conclusion: The viral claim is misleading. The old Swiss bank report of 2017 is viral as a recent one. In the last two years, the deposits of Indians in Swiss banks have decreased.