The viral post is fake. The construction of the PHC is completed and the building was inaugurated last month. 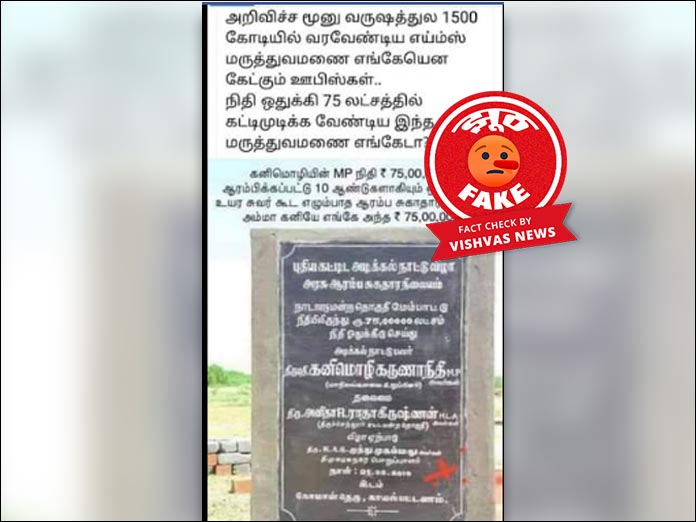 New Delhi (Vishvas News). A viral post on social media alleges the incompletion of primary health centre building project in Kayalpattinam, a municipality in Thoothukudi district of Tamil Nadu. It claims the project of Rs 75lakh is incomplete since ten years after the ground-breaking ceremony.

Vishvas News investigation revealed the claim is fake. Public Works Department official refuted the claims saying the project has been completed and was inaugurated last month.

A post with a picture detailing on the new construction of Primary Health Centre (PHC) in Kayalpattinam inaugurated by MP Kanimozhi alleges the project is incomplete even after ten years.

We observed the viral picture questions the opposition on the Rs 75lakh PHC project they promised before ten years in comparison with the ruling party’s promise of constructing AIIMS hospital in Madurai.

Ahead of Assembly Elections on April 6, there are several fake news going rounds on the internet about the political parties. Vishvas News had earlier debunked few such posts.

We searched on the Internet for the picture using Google reverse image search and found it in a tweet by MP Kanimozhi. She had posted few other pictures from the ground-breaking ceremony on 21 February 2019.

We found regional news reports on the ground-breaking ceremony held in 2019 and not before ten years as claimed in the viral posts.

Vishvas News contacted Sudhakar, PWD supervisor in Kayalpattinam for clarification. “The viral post is fake. PHC construction works were completed. It was inaugurated in February this year,” he said.

MP Kanimozhi had also posted pictures of the new PHC building constructed under the Constituency Development project in a tweet on 26 February.

Social scanning of the user who shared the post revealed that he is from Thanjavur district and has 876 followers on Facebook. He is active since February 2013.

Conclusion: The viral post is fake. The construction of the PHC is completed and the building was inaugurated last month.