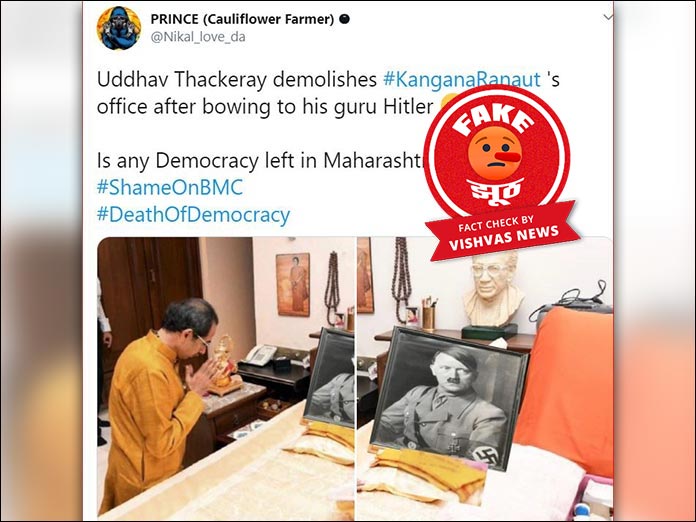 Vishvas News investigated and found the viral post to be fake. The original photo had Bal Thackeray’s picture which was edited and Hitler’s picture was pasted on it using editing tools. Also, the original picture is old and not the recent one.

Twitter user PRINCE (Cauliflower Farmer) @Nikal_love_da posted a tweet on September 9 that read: ‘Uddhav Thackeray demolishes #KanganaRanaut’s office after bowing to his guru Hitler. Is any Democracy left in Maharashtra ?? ‘

View the archived version of the viral tweet here.

During the investigation, Vishvas News found the original picture on the website of The Hindu. We used the Google reverse image tool to verify the image. We found the picture uploaded on Google Search results on November 26, 2019. Uddhav Thackeray can be clearly seen in the picture bowing in front of the photo of his father Bal Thackeray. The picture used in The Hindu stated that this photo was taken from Uddhav Thackeray’s official Twitter handle.

We scanned the Twitter account of Uddhav Thackeray @OfficeofUT. We found a picture tweeted from his Twitter handle on November 26, 2019. The picture can be seen below:

Vishvas News contacted Shiv Sena spokesperson Manisha Kayande for more information. He told us that the viral picture is fake. Some people are deliberately spreading this fake news.

Conclusion: Vishvas News investigated and found the viral post to be fake. It is an old photo in which Uddhav Thackerey is bowing his head not in front of Hitler’s picture, but in front of his father Bala Saheb Thackeray.