The viral post turned out to be false in the investigation of Vishvas News. Priyanka Gandhi Vadra’s wedding rituals were performed by a Kashmiri priest, not an Islamic cleric. 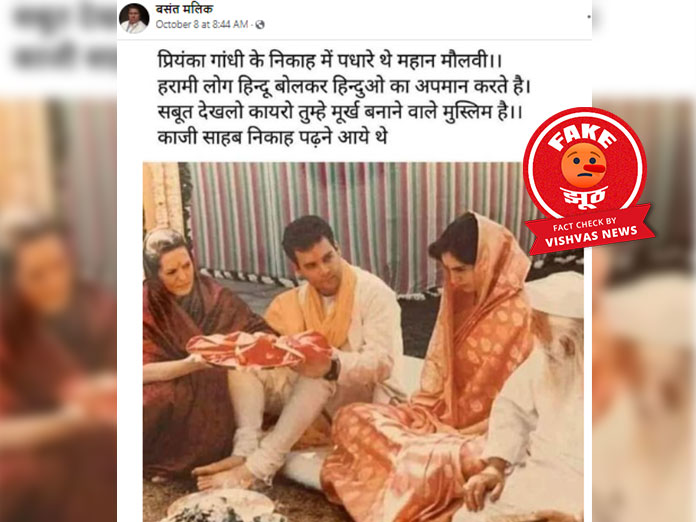 To investigate this viral post, we searched this picture by doing a Google reverse image search. We found this picture of Priyanka Gandhi and Robart Vadra’s wedding.

After this, we checked about the man with the white beard seen in the picture. Upon searching the internet, we found an article in India Today’s opinion section Daily O, which read “Iqbal Kishan Reu, the priest of the Gandhi family, performed puja for Priyanka Gandhi’s wedding.” The article also mentioned Rahul Gandhi doing the Kanyadaan of Priyanka Gandhi. This confirms that the wedding was performed according to Hindu customs.

After this, we checked on the internet about Iqbal Kishan Reu. We found an article in I-Kashmir that states that Pandit Swaroop Kishan Reu was Kashmir’s first cricket umpire and Padma Shri. Iqbal Kishan Reu is the brother of Swaroop Kishan, who was born in 1932 and used to perform Kashmiri rituals at his Hindu events. The family of Iqbal Kishan Reu has been performing rituals of the Nehru Gandhi family for many generations.

We spoke to Congress spokesperson Sanjeev Singh to confirm this. He said, “The claim of Maulvi’s presence at Priyanka Gandhi’s wedding is false. Priyanka Gandhi’s marriage ceremony was performed by a Pandit only. The marriage took place according to Hindu customs.”

Many users are sharing this claim on social media and one of them is a Facebook user named Nonthon Sinha. The user has 1300 followers.

Conclusion: The viral post turned out to be false in the investigation of Vishvas News. Priyanka Gandhi Vadra’s wedding rituals were performed by a Kashmiri priest, not an Islamic cleric.