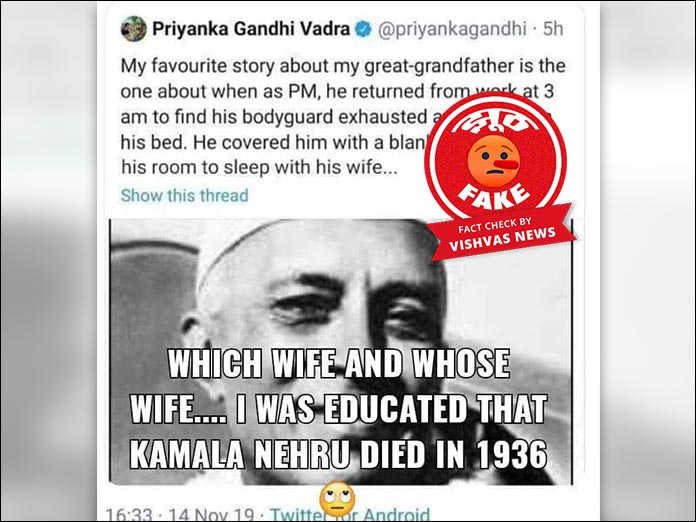 Vishvas News investigation revealed the viral claim is fake.  An old tweet of Priyanka Gandhi has been tampered and edited.

Facebook user Rajesh Verma uploaded a picture of a tweet allegedly by Priyanka Gandhi on 20 November expressing anger and disappointment with Nehru’s family.

We started searching the viral tweet using keywords in Twitter search. We found an old tweet of Priyanka Gandhi posted on 14 November 2019 writing, “My favorite story about my great-grandfather is the one about when PM, he returned from work at 3 am to find his bodyguard exhausted and asleep on his bed. He covered him with a blanket and slept on an adjacent chair.”

Vishvas News investigation revealed that the objectionable content was added to the original tweet by editing. We could clearly identify the difference between the original and the viral tweet.

We contacted Congress National Spokesperson Akhilesh Pratap Singh for verification. He said that the Gandhi-Nehru family has always been intimidating to the troll army and people continue creating such fake posts.

Social scanning of the user who shared the viral post revealed that he is a resident of New Delhi and has shared several viral posts even in the past.