In the investigation of Vishvas News, this claim turned out to be a false propaganda. The breaking plate going viral is edited. Raghav Chadha has not given any such statement regarding Bhagwant Mann. 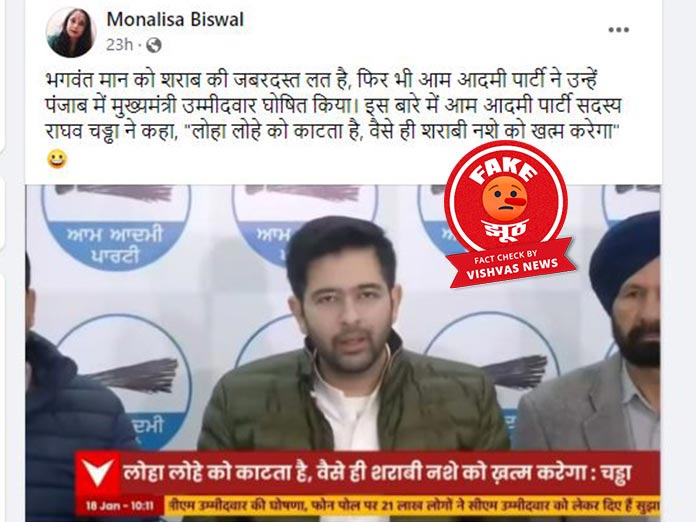 New Delhi (Vishvas News). Ever since Bhagwant Mann has been declared the face of the Punjab chief minister by the Aam Aadmi Party, social media is abuzz with various fake and misleading posts. Recently, a picture of a breaking plate of a Hindi news channel is going viral on social media where it is being claimed that Raghav Chadha, a member of the Aam Aadmi Party, has said about Bhagwant Mann that “the way iron cuts iron, in the same way, an alcoholic will end drugs.” In the investigation of Vishvas News, this claim proved to be fake propaganda. The viral breaking plate is edited. Raghav Chadha has not given any such statement regarding Bhagwant Mann.

Its archived version can be seen here.

It is unusual for Raghav Chadha to make such a statement regarding the CM candidate of his own party, so prima facie it is indicated to be fake. We could not find any statement related to it in a news search. We also checked all social media accounts of Raghav Chadha. But we could not find any information related to the viral claim anywhere. We also checked the social media accounts of Aam Aadmi Party. But we did not get any information related to the viral claim even there.

We went through the viral post carefully to start our investigation. We found that the logo of ABP News is there on the viral photo. After this, we searched on Google with some keywords. During this, we found a video uploaded on ABP’s YouTube channel on 18 January 2022. After watching the video, we found that the viral screenshot is from here only, but it has been edited. The scene of the viral screenshot can be seen at 1 minute 44 seconds. At 1 minute 44 seconds, Raghav Chaddha’s name is written on the breaking plate, which has been removed and a viral fake quote has been added.

The difference between the two can be clearly seen in the collage below.

For more details, we contacted AAP spokesperson Harjot Bhains. He told us “the viral claim is false. Raghav Chadha has not given any such statement. Opposition parties are spreading such false news to malign our image.”

Conclusion: In the investigation of Vishvas News, this claim turned out to be a false propaganda. The breaking plate going viral is edited. Raghav Chadha has not given any such statement regarding Bhagwant Mann.